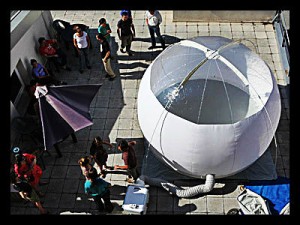 Horrific injuries caused by tank shelling, aerial bombardment and shrapnel are taking the lives of hundreds of Syrians every day. As cities are destroyed, hospitals and the valuable, lifesaving equipment they house are dwindling. In December 2012, Paul Jawor, a civil engineer working with Engineers Without Borders in Spain, presented a simple, safe, sanitary option for surgery on the battlefield of Syria. If plastic altitude chambers, or “plastic bubbles”, are utilized on the field and in bombed cities, surgeons could save multiple lives by simply having a safe place to operate.

Plastic altitude chambers are used to help athletes train by introducing specially formulated oxygen into the chamber. By using the same concept, the bubbles are filled with specifically filtered air to give doctors and surgeons the sterile environments that are essential for performing surgery. The bubbles are just big enough for a gurney, lights and a few doctors. Two bubbles can be connected to create a chamber to scrub in and a chamber to operate in to ensure optimal sanitation.

However, with its great benefits, surgery in a bubble has its drawbacks. As the walls of the bubble are fragile, the risk of destruction in a war zone is high. The bubble is also an easy target and at times cannot be camouflaged well. These simple drawbacks have prevented the use of the bubble in areas and war zones in the past. Engineers Without Borders must ensure that the bubble will work before they use it in Syria.

The alternative use of the plastic altitude chamber is not the only innovation that has as much use for saving lives as setbacks. Another innovation, the Rigid Inflatable Boat Ambulance, would be used in areas such as Cambodia and The Democratic Republic of Congo where river access is easier than road access. The ambulance would be used to transport injured people to hospitals. Due to the high speeds that the RIB travels at, the nature of the contents of the boat must be considered and whether or not carrying something like an oxygen tank is worth the risk. If the tank were to fall off the boat and land near a fire it would result in an explosion.

As technology continues to move forward, Engineers Without Borders will continue to create safe, life-saving equipment. “You often have to adapt new equipment to fit a new situation,” says Jawor in hopes that the bubble and the RIB Ambulance will soon ensure safe medical alternatives in any war-torn country.