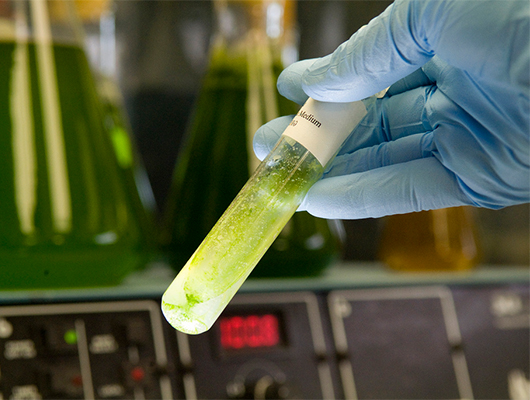 With the advent of solar power, wind power and water power, most people would believe that scientists have used nature and all of its wonders to its greatest capacity, but there is one key aspect we have been missing: plant power.

For many years, scientists have been searching for an alternative source of energy and have had some luck on these ventures, but researchers at Cambridge University have now been able to harness the energy generated from photosynthesis to power cell phones.

As algae blooms, it absorbs a massive amount of sunlight, thus giving it a bright green color. In order to bloom and grow successfully, algae must utilize photosynthesis, as all other plants do. By converting sunlight into energy, these plants are able to grow bigger, but this energy may be able to be utilized to charge phones and other small electric devices.

Head of the Department of Plant Sciences at Cambridge University, Professor Sir David Baulcombe, stated that “algae offer considerable potential as a source of bioenergy. By studying the fundamentals of their metabolism and molecular biology and by understanding the fantastic natural variation in the different types of algae we can harness this potential for energy production.”

The Cambridge team’s discovery shows a lot of promise. This type of energy conversion is miles ahead of the photovoltaic cells most people are used to. These cells are biologically based, self-repairing, self-replicating, thoroughly biodegradable and thoroughly sustainable, creating an amazing entry into the world of truly green energy.

Recently, researchers at Cambridge have also been investigating the strength of regular plants. They have grown these plants in a vertical garden and utilizing the same concept of harnessing spare electrons from photosynthesis, have been able to power cell phones. However, these walls may take entire days to charge phones. After testing several plants, algae still remains the strongest and most productive source of energy.

At this point in time, most of the worlds’ energy comes from oil, and most of that oil comes from the Middle East. Many powerful nations, the United States being the most notorious of them all, have been intervening in Middle Eastern politics in order to ensure the safety of their precious oil supplies. For this reason, many wars have broken out, rulers have been overthrown and lives have been lost.

The invention of a source of green energy that comes directly from nature itself will drastically reduce dependence on oil as scientists are able to learn more and more about the true capability of nature. There are already solar-powered cars in the making, so maybe plant power is the next step. This would be a world out of the Lorax’s dreams, one where plants are abundant and well maintained.

By utilizing plants and their natural cycles as sources of energy, we create an even stronger dependency on them, thus causing people to plant more and more cautious in regards to nature. Of course, all of this is very far off in the future, but it will be very interesting to see how researchers decide to utilize nature and its power in the future.