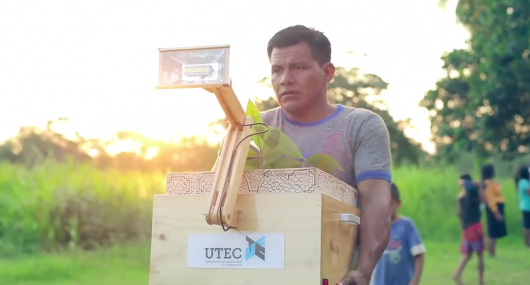 According to the Universidad de Ingenieria y Tecnologia (UTEC), around 40 percent of the rainforest villages in Peru do not have much electricity.

Translation: sundown means lights out. It’s a genuine problem for families and students unless they resort to unhealthy and dangerous kerosene lamps which are bad for eyesight and lungs because of the resulting smoke.

Nature, the geographical isolation of these communities and routine flooding are all part of the problem.

However, researchers and students at UTEC decided to make nature part of the solution. Taking stock of their surroundings, the team used two plants and soil to create “plantalámparas” or plant lamps.

Elmer Ramirez, a professor of Energy and Power Engineering at UTEC, explains, “We can obtain energy from the earth. Based on principles and findings documented in other countries we developed our own prototype, using a clean energy system.”

Ramirez goes on, “Every plant produces nutrients, and these nutrients — in contact with microorganisms in the earth called geobacter — undergo an oxidation process generating free electrons that are captured through electrodes. These electrodes are in a grid. This energy is stored in a conventional battery to be used to light an LED light bulb.”

The battery then powers the low-consumption LED lamp, attached to the side of the planter. Each lamp is capable of generating enough power to supply two hours of light per day.

UTEC has partnered with global ad agency FCB Mayo to produce several prototypes for distribution. As of now, ten houses in Nuevo Saposoa have a plant lamp. With such innovation and low production costs, the demand for plant lamps will likely increase.

A promotional video provided by UTEC presents many members of the Nuevo Saposoa community expressing their gratitude. One resident is heard saying, “electricity is life for our children.”