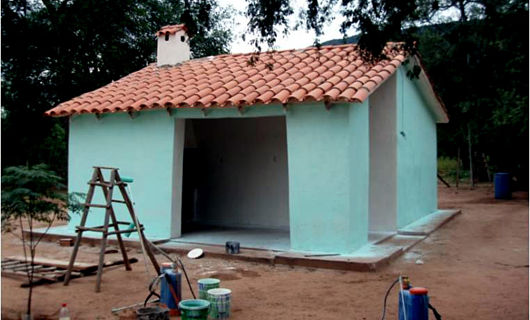 Chagas disease is a disease caused by the bite of triatomines. These are large, beetle-like bugs known to locals as vinchucas, or “kissing bugs,” that reside in the thatched roofs and mud walls used in traditional Latin American homes. Families who live in such homes are often forced to sleep outside to escape being bitten, and potentially infected, at night. Chagas disease has become endemic throughout Latin America; however, more than 1 million of those infected live in the United States, many of them immigrants.

If the infection is caught early it can be cured, but Chagas disease often goes undetected because those most vulnerable to infection lack access to adequate health care. Left untreated, the disease can become chronic and is often fatal.

The recent rising rates and spread of Chagas disease have been compared to the early years of the AIDS pandemic. It is one of the major health problems in South America, but because this is a disease of the poor, little money is being spent on treating, curing or preventing it. There are shortages of drugs that help those who have been infected and barely any research on exploring a cure. This is why prevention needs to be the solution.

Pilar Mateo is a Spanish chemist who has engineered a paint formula that eliminates infestations of bugs, including vinchucas, mosquitos, spiders, ticks, bedbugs, fleas and ants. Her idea to vaccinate homes instead of people led to the creation of her company, Inesfly Corp. One coat of Inesfly paint almost entirely eliminates the presence of creepy crawlers, reducing the rate of vinchucas infestations in many Bolivian villages from 90 percent to virtually zero.

The way Inesfly paint works is simple. Within the water-based paint are “microcapsules” of vinchucas-killing pesticides that are slowly released. The paint — and its pesticide — remains effective for several years. Moreover, the microcapsules have insect growth regulators; they not only kill full-grown insects but also eliminate eggs and newly-hatched insects that are resistant to pesticides. As if that isn’t enough, because Inesfly paint releases bug-killing chemicals in such small doses, it is safer than fumigation for both people’s health and the environment.

Mateo’s solution to disease-spreading bugs stemmed from her experience in Bolivia, where she first tested her new paint mixture in 1998. She contends that poverty, instead of insects, is the real source of disease. After building relationships with the indigenous women in Bolivia and witnessing the difference her paint made on their lives and the lives of their children, Mateo realized that a new coat of paint could mean a renewed chance at a better, longer life. Eradicating deadly diseases takes more than pest control; there is a strong link between poverty and disease and in order to eliminate diseases like Chagas disease, there needs to be a continued effort to eradicate poverty.