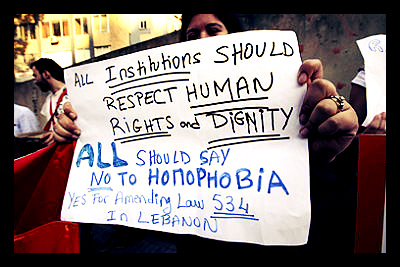 In 2006, The Pew Global Attitudes Project poll revealed that 79 percent of Lebanese people thought that homosexuality “should be rejected.” Such a high percentage can be considered as quite high by some western and more liberal regional standards (Israel and Turkey were in the 50 percent rejection range.) Compared to more conservative Middle Eastern countries, however, Lebanon is considered to be more progressive concerning the treatment of lesbian, gay, bisexual and transgender (LGBT) citizens.

In Egypt’s Pew research poll only one percent of people said that homosexuality should be accepted. On the other hand, however, in other countries such as Iran and Saudi Arabia, a gay person can be jailed, lashed, or put to death.

More liberal attitudes on homosexuality are largely associated with Beirut, Lebanon’s capital, where there is an underground, but lively gay culture.

It is in Beirut that Helem became the Arab world’s first LGBT advocacy group in 2001 and continues to this day, to be a powerful force against homophobia and abuse. Their stated primary goal is to rid Lebanon of Article 534, which outlaws “unnatural sexual intercourse.”

Though the law is not commonly used against homosexuals (a landmark 2009 ruling stated that Article 534 did not pertain to them), the wording of the law still provides justification for action to be taken against LGBT individuals within the safety of a vague legal framework.

In April 2013, the police force raided a LGBT bar in Dekwaneh, a conservative town near Beirut, and arrested several patrons. Those taken into custody were stripped and photographed, reportedly so the police could accurately identify their sex.

The Interior Minister of Lebanon’s interim government lauded the 2013 bar raid, and reiterated, “Lebanon is opposed to homosexuality.”

At the same time, the Lebanese Psychological Association was the first in the Arab world to declare in July 2013 that homosexuality is not a disease. It stated, “Homosexuality in itself does not cause any defect in judgment, stability, reliability or social and professional abilities.” The association also criticized the practice of gay conversion therapy as scientifically baseless.

The Lebanese Broadcast Company reported a scathing criticism of the 2012 cinema raid, calling Lebanon “the republic of shame.” Citizens also took to social media to express their outrage—on both sides—about a topic not typically discussed openly.

With reports from October 2013, concerning the Beirut International Film Festival, banned the French gay love story “Stranger by the Lake” due to “obscene scenes of kissing between gay men…naked men, and sexual intercourse between men,” it is unclear what the future is for LGBT rights in Lebanon.

When asked by the BBC about Article 534, Justice Minister Qortbawi stated, “The law is a mirror of a society. And I think we need a lot of time before we get that far.”