Tag Archive for: Pencils for Promise 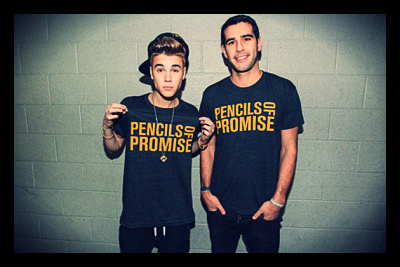 Since its founding in 2008, Pencils of Promise has been working towards improving access to education around the globe. The non-profit has set out to identify places most in need of educational facilities and then proceeding to build schools in those locations.

However, the organization’s role does not end there. To ensure the sustainability of their projects, Pencils of Promise also offers scholarships, education programs, and hires and trains individuals from local communities to staff their schools. With a focus on long-term success, schools and curricula are also routinely monitored and assessed for efficacy.

Canadian pop sensation, Justin Bieber, has been an avid supporter of Pencils of Promise for many years. In 2011, the smooth-voiced crooner competed in a Magnum Ice Cream contest against Nelly Furtado, Usher, and Jordin Sparks for $20,000 toward their charities of choice.

Bieber ended up easily defeating his opponents and winning the competition, and split the award money evenly between Pencils of Promise and Make-A-Wish Foundation.

The following year, the teen star went on to join Pencils of Promise’s founder, Adam Braun, in filming a promotional video encouraging adolescents to create personal fundraising pages on behalf of the organization. The incentive (aside from the gift of giving, of course)? Bieber would pay a visit to the three schools that demonstrated the most impact through fundraising for the Schools4All campaign.

With each $25 contribution, contestants would be compensated with one lottery entry. The more entries and donations one collected, the better the chance that he or she would get to meet Bieber.

According to the singer, “”I wanted to give every one of my fans a chance to help others and bring me to their school for just $25. The Schools4All campaign is a way for us young people to make a change, and I’ll get to thank an entire school in person.”

To further magnify the project’s significance, Bieber also partnered with Barnes & Noble and Nook to match the amount of money generated by fundraising participants and to donate 1,000 Nook readers to students enrolled in Pencils of Promise schools.

Thanks, in no small part to Bieber, Pencils of Promise’s reach continues to grow as it gains prominence. To date, the organization has built 146 schools in countries such as Ghana, Laos, Nicaragua, and Guatemala.

From his deep involvement with Pencils of Promise and his commitment to furthering its goals, Bieber sets a prime example of how to use one’s star power to alleviate the ill effects of global poverty.