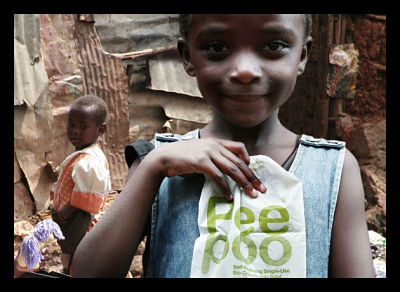 Sadly, 40% of the world’s population lack access to basic latrines.

Without toilets, people must resort to relieving themselves in plastic bags, which they throw as far away from their home as they can; a phenomenon known as “flying toilets.” In some areas, flying toilets have become a a public health concern.

In slums especially the scarcity of toilets has become particularly worrisome. Dozens of people share the same toilet, and the poor maintenance and virtually nonexistent hygiene of these places makes people more than reluctant to go. Landlords are also not willing to build more facilities, preferring instead to build more houses and rooms that they can rent to earn an income.

Women and children are the most vulnerable to the lack of hygiene. According to Peepoople, “one child dies every 15 seconds due to contaminated water from human excreta.” Just as bad, the lack of privacy makes women prey to rape and sexual harassment, especially at night when they have to look for sanitation facilities. When adolescent girls have their period, they have to stay home from school because they cannot take care of their hygiene.

Peepoople, an organization aimed at providing millions of people with sanitation facilities in the respect of their dignity, has implemented an innovative solution to curb one of the world’s most serious problems. It has created the PeePoo.

The PeePoo is a bag that “contains five grams of urea, which breaks down waste into ammonia and carbonate,” thereby transforming potentially harmful waste into harmless fertilizer. Biodegradable and designed for the world’s poorest, PeePoo bags only cost $0.03 each.

In the Nairobi slums where Peepoople operates, an incredible micro-economy has emerged after the introduction of the PeePoo bags. For instance, the bags can be used as garden fertilizer, thereby fostering local agriculture and plantation, but they can also be returned to a collection point for a reimbursement of $0.01 per bag.

Seizing the opportunity, some have even made a living off the reimbursement fee. For instance, Mama Lucy, mother of three, told Al Jazeera, “I didn’t have a regular job before the Peepoos were introduced, but I saw an opportunity when people did not want to drop off the bags themselves. Now I do two rounds a day to pick Peepoos from people’s houses. On a good week I earn about a thousand shillings ($11).” Since the introduction of the PeePoo, the number of sexual crimes has also decreased in the Silanga village, according to Mika Mitoko, project manager at Peepoople.

Involving no investment or infrastructure, the PeePoo has proved that easy and cheap solutions can save millions of lives. To learn more about Peepoople, visit their website at: http://www.peepoople.com