Tag Archive for: Partners for Possibility 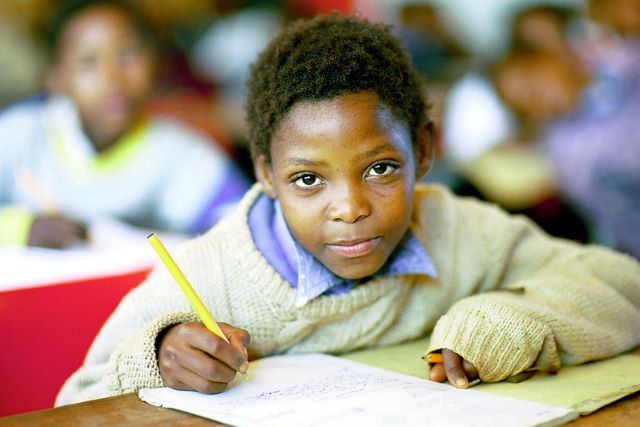 South Africa is a country with 19.6 million children, making up about 35% of its total population of 56.5 million people. Of these 19.6 million children, about 98% have “attended some form of an educational facility.” However, these high attendance rates do not mean high-quality education and lack of academic resources is a large contributing factor to the correlation between South African poverty and education.

Despite having high rates of education enrollment, the quality of education in South Africa is poor. Reports have shown that of the students who attended school for five years, only half can do basic math. Furthermore, there are little to no standards for the teachers to be held at. About 10% of teachers across the country are absent from school on any given day and 79% of grade six math teachers do not have the content knowledge to be teaching at their respective level.

Education is compulsory until grade nine, and over the years, there have been increasing numbers of drop-out students, for a variety of reasons. The main reason is unequal access to resources as a result of poverty. The disparities between female and male students also continually present issues in the South African education system, especially with low percentages of girls pursuing careers in science, math or technology.

In addition, South African schools have struggled to teach basic skills such as reading and writing as well as early development for young children. Only 38.4% of children ages zero to four attended a school system such as day-care, playgroup or pre-kindergarten programs. The early development issue is further seen as 46.8% of parents say they do not read with their children and 43.15% say that they do not color or draw with their children.

South Africa has struggled with high rates of poverty for many years and the correlation between South African poverty and education is present in many different aspects of the relationship. In rural areas in the former homelands, about 81% of children are below the poverty line and 44% of children in urban areas live in poverty as well. Education in rural areas suffers especially, simply as a result of the barriers presented by the location. For example, critical resources such as water, electricity, books and technology are missing from many schools, which present obstacles for South African children to have a complete educational experience. Furthermore, the location of schools in comparison to students’ homes, present long commutes. Without reliable transportation, students and teachers both struggle to consistently arrive at school.

Poor education is a leading factor in continuing the cycle of poverty. Research continually supports the idea that children who suffer from high rates of poverty are more likely to drop out of school after grade nine as a result of the barriers poverty creates. Increasing the quality of education results in a growing economy, lowers income inequalities and decreases the risk of disease and violence. Without a basic education, South African children struggle to become members of the workforce, and as a result, cannot escape poverty. Education not only teaches basic skills such as reading and writing but helps to develop important qualities such as strong communication and social skills. Without this, it is difficult for children to become working members of society. Furthermore, education differences between the poor and the rich as well as males and females, increases inequality, resulting in poor systems that cannot fix the underlying issues.

Partners for Possibility is an example of a grassroots organization that works to fix the issues between South African poverty and education all while improving businesses in the United States. Business leaders from companies in the United States go overseas to South Africa for a 12-month program in which they teach principals and leaders of schools about leadership and engagement. By doing so, business professionals help to change the unstable and ineffective system of South African education, while simultaneously learning about poverty and culture in South Africa. The program has had extremely positive outcomes as education leaders, teachers and parents become more invested and engaged in the school system, which in turn, benefits the children.

South African poverty and education are strongly linked and this presents many issues for children. However, it is not an impossible mission to address and Partners for Possibility demonstrates the mutual return for U.S. businesses and South Africans that comes with finding these solutions.