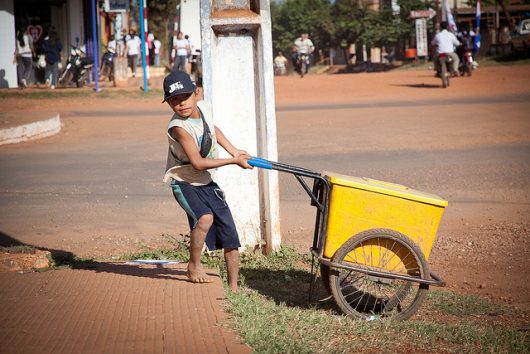 Paraguay is a small landlocked country in South America with a relatively sparse population of seven million. Unlike many of its quickly industrializing neighbors, Paraguay’s economy is still mostly dependent on the country’s abundant natural resources.

Perhaps the most impressive feature of Paraguay is its poverty rate. Although the poverty rate as of 2015 was an alarming 22.2 percent, it is actually a mark of considerable improvement. Only 10 years ago, the rate was 41.2 percent – demonstrating that within 10 years Paraguay managed to cut its national poverty rate virtually in half.

Despite the country’s triumphs over poverty, Paraguay is still in a vulnerable situation. Because the economy of Paraguay is not sufficiently diverse, the country may suffer disproportionately from shocks to certain markets and commodities. As a result of the country’s great dependence on natural resources, natural disasters such as droughts can severely harm Paraguay’s economic growth and reduce the success of its anti-poverty measures.

In addition, Paraguay’s lack of infrastructure and weak taxation policies make it difficult for the government to provide services and resources to the population. Concerns over government transparency make it even more challenging for Paraguay to encourage sustainable growth. Thankfully, the government has taken steps to maintain economic growth and significantly diminish Paraguay’s poverty rate. Paraguay’s government now pushes to diversify the economy and attract foreign direct investment in the hopes of creating long-term prosperity.

Paraguay and the World Bank have agreed on a Country Partnership Strategy, which focuses on developing infrastructure and providing services to the country’s many rural areas. Some of the objectives delineated in the multi-part strategy include overhauling the taxation system and building roads.

Overall, Paraguay is a country that has largely succeeded in its battle to decrease extreme poverty, despite the odds. Even with a small population, poor infrastructure and a history of political instability, the country has managed to actively search for and implement solutions that have shown drastic results. With enough know-how, strategy and optimism, the government will surely be able to continue to bring the country of Paraguay closer to its goal of eradicating poverty altogether.