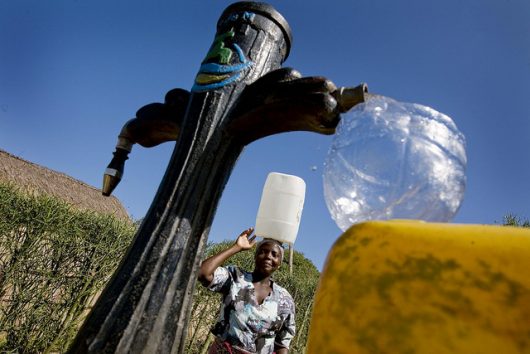 If necessity truly is the mother of invention, then never before has the world labored so hard. Indeed, our world faces many challenges, and nurtures many needs, but none so basic as those ventured every day in developing countries. Innovators the world over have taken this challenge to heart and have created practical inventions that both fight poverty and have the ability to change our perception of the possible.

Basic access to clean water shouldn’t be the challenge it has become. In truth, 663 million people do not have this access. Watt-r is the solar-powered water delivery cart, that while it is still in development, would be able to carry a dozen 20-liter containers of water at a time.

What does that mean for someone in a developing nation? It means that inventions that fight poverty also save time and lives. Instead of 25 women or children walking to get clean water, one person operates the machine, which while idle, can charge items like phones, lamps and tools.

For those living in poverty in developing countries, finding renewable energy is a key to survival. The SALt Lamp requires simply two tablespoons of salt and one glass of water for an entire night of light. As it can also run on seawater, it is a nearly limitless energy source.

Currently, production of the SALt Lamp is aimed at nonprofit organizations for its possibilities in developing countries, where electricity is not always a guarantee.

It’s a bird. It’s a plane. No…it’s life-saving medical supplies falling from the sky. The Aspara cardboard drone has GPS and two wing-flap motors, and it can deliver two pounds of life-saving materials without needing to be retrieved.

The industrial paper airplane can accurately deliver supplies to even the most remote of places. With refinement, it is hoped that the flyer can be scaled to carry up to 22 pounds of cargo, with new prototypes aimed at humanitarian groups.

Inventions that fight poverty do so by meeting needs where the needs exist. The MetaFridge keeps vaccines safe during long power outages, which in developing countries, can plague an already ravaged land. With more than 40 units tested in Kenya, Nigeria and Ethiopia, the MetaFridge keeps temperatures stabilized for vaccines.

Researchers have explored this idea even further and are now working on a portable cooler for vaccinators to reach kids in the remotest of places.

Imagine all the contaminants that thrive in an unclean water source. Now imagine 99 percent of these contaminants being defused by the simplest of devices — a straw. Sometimes inventions that fight poverty do so in ways that seem too simple to be able to work.

The LifeStraw is a device that filters water through narrow fibers that trap unwanted contaminants. In places around the world where expensive filtration systems are not readily available, the LifeStraw can live up to its name.

Piloted in India in 2016, the Hans Free Electric Bike provides so many ‘no’s’ that are easy to say ‘yes’ to — no utility bill, no waiting for the elements to cooperate and no pollution.

The hybrid bicycle runs on a flywheel, which then turns a generator, which finally charges a battery. Power is literally put in a person’s hands — or rather, their legs. How effective is this? One hour of pedaling on this bike provides 24 hours of electricity.

What can $.20 buy nowadays? How about an on-the-spot diagnosis. The Paperfuge centrifuge costs $.20 to make and can diagnose diseases like malaria and HIV within minutes.

That’s life-saving power without the aid of electricity. The toy-like device holds bloods samples on a disc, while someone pulls on strings to spin the disc at fast speeds, separating blood from plasma in mere minutes. Cheap, lightweight and effective, the Paperfuge is one of the inventions that fight poverty in a way that benefits all.

This potentially life-saving capability could provide a needed voice for those whose voice has been taken from them. Whether doctors or aid workers, a need is only a translation away.

Around the world, children often outgrow their clothes too quickly, and in developing countries this usually means wearing clothes that simply do not fit. Petit-Pli is a clothing line that grows with a child for up to seven sizes.

The waterproof, lightweight material reduces waste and saves families money. With Petit-Pli, parents of those without much will have less to worry about.

In the rural Lake Zone of Tanzania, inventions that fight poverty sometimes come in the form of programs like Vodafone, an ambulance taxi program that uses the mobile money system M-PESA.

Vetted taxi drivers respond to hotline calls from pregnant women in health emergencies. Where there are few ambulances available, lives are saved.

Inventions that fight poverty do so through the power of innovation, but this particular kind of innovation is fueled by a desire to help — the only real requirement for progress.