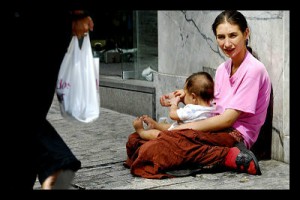 Last November, NBC New York investigated a group of women who appeared to be working in syndicate using children to panhandle on the streets of New York. Though they turned out not to be homeless, they were still using toddler-aged children to appeal to strangers for money. When offered food and shelter by well-meaning individuals, they would turn them down.

While panhandling with children is termed a misdemeanor in the state of New York, there are plenty of people in urban areas who are all too willing to exploit children in similar, yet far more sinister ways.

In broken English, an anonymous writer explained that there are actually networks of women who are controlled by crime rings. They sit on the street with unknown infants that have been drugged into unconsciousness with vodka or heroin to make them sleep. Said children are either ‘borrowed’ from unfit parents or outright kidnapped.

The most repulsive aspect of this story, if it is to be believed, is that children often die from overdoses. In these cases the street ‘mothers’ have to hold the corpse all day in order to collect money on the streets of the unnamed city until the end of their shifts.

An anonymous commenter on the story claims to have seen this phenomenon in action in Uganda, while another corroborates it with accounts of trafficked infants and children in China.

According to Polaris, human trafficking takes on many other forms besides panhandling. It happens both in third world countries and in the United States and often disguises itself under the façades of spas, restaurants, carnivals and other small businesses.

Approximately 20.9 million people have been trafficked both domestically and abroad. Among the most vulnerable groups are children, migrants, troubled minors and victims of social stigmatization, sexual assault, domestic violence or war.

The traffickers recruit by promising victims lucrative jobs, novel opportunities and even romantic relationships. Once they are firmly in hand, the perpetrators flip the switch, employing psychologically coercive and damaging tactics such as threats, lies, physical force and emotional manipulation.

Children in particular are prone to the tactics employed by traffickers because their frontal lobes do not fully mature until around the age of 25. The frontal lobe is responsible for conscious reasoning and decision making.

They become especially vulnerable when they run away from home and are exploring unfamiliar territory. Under these circumstances, minors are more likely to rely on the kindness of strangers, in these instances to their grave detriment.

In the worst case scenarios, the traffickers turn out to be pimps who force their female victims into prostitution. Often, they wait near truck stops and gas stations for their next clients to drive up before knocking on their doors.

Despicable as the pimps may be, however, they are working off what is ultimately a profitable business model. It is profitable because the people who pay for the sexual favors and services of slaves are either ignorant or choosing to rationalize their decisions. It’s time to stop being part of the epidemic of human rights violations. Wake up, read up, call up and stop the spread of evil.