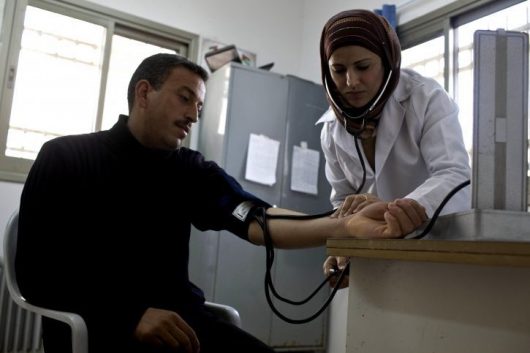 Due to the Israeli-Palestinian conflict, the people of the Palestinian territories are under a tremendous amount of stress. Adding to their troubles is the fact that citizens also have to worry about the risk of contracting certain diseases.

The most common diseases in the Palestinian territories are non-communicable; cancer and cardiovascular disease are especially common. Although there is not a lot of data on the matter, there is still enough to explain that these diseases are a serious problem. According to research, lung cancer is the cancer that is most responsible for male deaths in the Palestinian territories. Statistics also state that heart disease causes 26 percent of deaths there. While cardiovascular disease and cancer may be caused by people’s family histories and lifestyles, they remain an issue partially caused by the Israeli-Palestinian conflict.

The division between the West Bank and Gaza makes access to healthcare more difficult to acquire for the people of the Palestinian territories. To cross the border, individuals need approved permits that allow them to do so. To make the process even more difficult, Israeli security services sometimes ask the patients to attend an interview in order to be granted access. The slow procedure of obtaining a permit results in health conditions worsening as the people wait for the opportunity to receive treatment.

Although the Israeli-Palestinian conflict provides the people with some obstacles, there have also been some advancements made. In 2015, Israeli authorities declared that men over 55 years and women over 50 years in age do not need permits. This caused the permit approval rate for West Bank patients to rise about five percent from the previous year. With improvements like this being made, healthcare access will hopefully continue to become more available and common diseases in the Palestinian territories – like cardiovascular disease and cancer – will become less common.