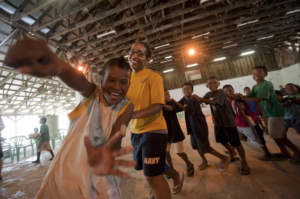 In 2012, New Zealand reported that across the country, indigenous children aged zero to 15 years old were considered to be in overall good health. The discrepancy in overall health between indigenous and non-indigenous people came to light in adulthood. For instance, Māori and Pacific Islanders have higher rates of diabetes and obesity when compared to non-indigenous New Zealanders, with 44% of Māori people reportedly suffering from obesity.

Another health challenge for indigenous people in New Zealand is the heightened rate of smoking. Māori adults are 2.7 times more likely to smoke than non-indigenous New Zealanders. Additionally, 24% of the Pacific Islander population in New Zealanders are smokers. This is two times higher than the national smoking rate of 12%. The Smoke-Free Organization of New Zealand also reports that adults who smoke are more likely to have poor mental health.

A 2018 health survey found that indigenous people are more likely to experience psychological distress and be diagnosed with a mental health disorder than non-indigenous citizens. It is estimated that around 50% of the Māori population will experience a mental health disorder throughout their lifetimes. Of this 50%, only half will seek professional attention concerning their mental condition. By comparison, non-indigenous people are 25% more likely to receive professional attention for mental disorders than indigenous New Zealanders.

Another initiative being established to improve indigenous healthcare in New Zealand is the cultural safety education training provided to nurses and midwives. This training places emphasis on the fact that healthcare professionals play a role in a healthcare system with obstacles and barriers that inhibit people from accessing healthcare. The training also ensures that professionals consider the cultural, historical and political context of each patient when providing care.