Tag Archive for: Outbreaks in Liberia 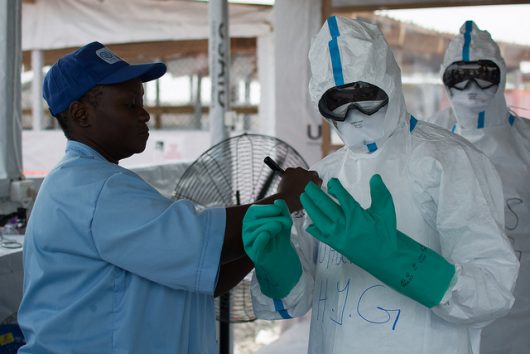 The first outbreak of Ebola in Liberia was documented in March 2014. By June of that year, Ebola began to take lives. On August 6, the president of Liberia declared a state of emergency, closed schools, and established an Ebola task force.

In her statement on August 6, President Ellen Johnson Sirleaf stated, “The virus currently has no cure and has a fatality rate of up to 90 percent. The aggregate number of cases: confirmed, probable and suspected in Liberia has now exceeded 500 with about 271 cumulative deaths. With 32 deaths among health care workers. The death rate among citizens, especially among health workers is alarming.”

In mid-August, the Ivory Coast banned all flights traveling to or from Liberia. Ebola had also spread to neighboring countries, including Guinea and Sierra Leone. Multiple clinics began opening in Monrovia, country’s capital, and across the country, but they did not have enough space to house all those inflicted, and many people died outside hospitals waiting for care.

The president of Liberia requested international assistance in early October of 2014, and on October 16, President Barack Obama granted the use of the National Guard and reservists in Liberia.

At that point, nearly 4,500 people had died from Ebola in Liberia, Sierra Leone and Guinea. The military personnel sent by the U.S. assisted in building clinics and providing humanitarian assistance.

World Health Organisation (WHO) began to implement its 70-70-60 plan to curb the epidemic. The goal was to get 70 percent of the cases isolated and 70 percent of the deceased buried safely within 60 days starting on October 1, 2014. WHO also worked with Liberia’s Ministry of Health to train health care workers on how to safely treat patients that were infected.

In November 2014, WHO reported that there was evidence of a decline of new cases of Ebola in Liberia. In January 2015, clinics that had been overflowing began to close due to a lack of patients.

As of January 28, 2015, there were only five reported cases of Ebola in Liberia. The prevalence of the disease began declining significantly over the next year.

On the May 9, Liberia was declared Ebola-free and three months passed without a recurrence of the disease. Medecins Sans Frontieres encouraged people to stay aware of the disease coming back after the announcement of the eradication.

A few new cases were found in the summer of 2015, but they did not lead to another significant outbreak. Liberia continued to be declared Ebola-free on and off for every 42-day period that passed without a reported case. Most recently, Liberia has been Ebola-free since June 9, 2016.

The Causes for Epidemic Spreading

The massive outbreak of Ebola in Liberia has been contributed by lack of sanitation, corruption and hiding of bodies/diseased people, among others factors.

Many Liberians did not report cases of Ebola or deaths due to it. Instead, they were self-treating and burying bodies in unsafe places. This practice led to the disease spreading at a faster pace.

Lack of sanitation was a major contributor, as many Liberians in Monrovia use the beach and the river as a lavatory. Without sanitary spaces, Ebola was able to run rampant. Additionally, it was reported that body-collection teams would accept bribes from families who did not want people to know their relative died of Ebola. Instead of collecting the body, the teams would leave it with the family so they could host their own funeral.

Thankfully, Liberia has been Ebola-free since 2016 and is now better equipped to handle an outbreak it was to return.