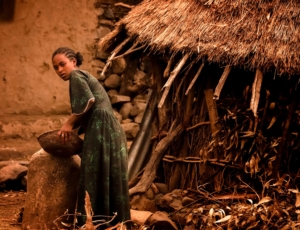 According to the United Nations Development Program (UNDP), addressing poverty means first reaching those who feel the greatest impact; progress does not necessarily trickle down to the population that is most disadvantaged. The 2016 Human Development Report found that one-third of the world’s population lives in low human development circumstances. Furthermore, some sectors of society are more disadvantaged than others. Inequalities and social exclusion that people such as those living with HIV face present larger barriers to development and access to health programs. For this reason, the World Food Programme, alongside UNDP, UNAIDS and the national network of people living with HIV in Djibouti (RNDP+), have created an income-generation program that provides loans for people living with HIV. Such loans are empowering women with HIV in Djibouti to live dignified and successful lives.

Men and Women with HIV in Djibouti

As of 2017, 1.3 percent of the adult population in Djibouti was living with HIV, a decrease from 1.6 percent – or 9,900 people – in 2014. Social and cultural norms, destructive policies, improper medical services and restrictive laws impede HIV treatment and prevention measures. In Djibouti, women are most vulnerable to stigma and social exclusion and therefore often suffer the most.

The World Food Programme’s income-generation initiative supports and empowers women through longterm aid. By providing a regular, stable income, the World Food Programme is creating financial security for women with HIV in Djibouti. The money that women receive typically goes toward starting and running a retail business. These loans generally range from $141 to $148 per person and include a training program teaching effective business skills.

Recipients of the loan become chosen from two networks in Djibouti that specifically support those living with HIV: ARREY and Oui à la Vie – Yes to Life. Oftentimes, those diagnosed with HIV are susceptible to deteriorating conditions, are unable to hold down a job and face discrimination, causing the citizens to be unwelcome in public sectors. Women with HIV in Djibouti that receive these loans are able to make a consistent income for themselves and overcome the stigma that some associate with HIV. Further, these women are able to take back control of the lives they previously led.

One such recipient of the loan stated that she was “no longer a desperate woman.” She now makes enough to support her family and other dependents. Additionally, once this loan gave her the capital to launch a sustainable business, she was able to repay the loan in only 10 months. During that time the recipient was also able to expand the retail business to include furniture and electronics.

The World Food Programme’s income-generation initiative aids the Sustainable Development Goal of ending HIV by 2030, and furthermore, leaving no person behind. According to UNDP’s findings, development itself does not automatically ensure that the entire population is included. Programs such as this target the multidimensional factors involved in people receiving proper aid.

Empowerment is an essential part of development; without the ability to feel successful and fulfilled, women often lack the means to seek treatment and make educated decisions regarding health. The loan initiative empowers women living with HIV in Djibouti to combat the associated stigma and obtain financial investment necessary to develop a sustainable business. With a stable income, women are able to seek health services that might not have been previously accessible.