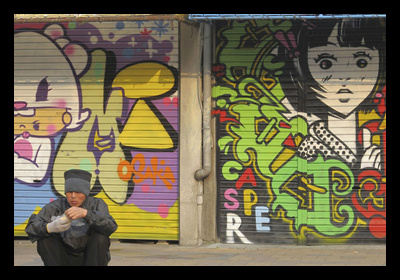 Japan currently ranks fourth globally with the highest percentage of people living in relative poverty. ‘Relative poverty’ is a term that means the population does not have enough resources to live on, and individuals are unable to provide themselves with basic and essential needs. Japan has approximately 16.1 percent of its population existing in this status. This condition is exemplified in the Osaka slum discussed below.

Within Japan, a slum exists that is a prime example of foreign global poverty. It is a small area, only .24 square miles. The city itself cannot be found on maps of Japan. It is where the poorest people in Osaka, Japan reside. It is the largest slum in Japan: Kamagasaki.

Almost 40 years ago, Kamagasaki was a thriving area in Osaka, due to its construction businesses, and many laborers came from throughout Japan to work there because of such high demand. Three historical events changed Kamagasaki. In 1995, the Hanshin earthquake killed over 6,000 people throughout Japan. Then, in 2010, the rate of economic growth began decreasing in Japan, and it no longer had the second largest growing economy in the world. The demand for labor in Kamagasaki further declined and created more poor. And finally in March 2011, the Great East Japan earthquake occurred. In Kamagasaki, of the 330,000 workers evacuated after the earthquake, 200,000 were estimated to be out of work.

There was a rapid decline into poverty in this specific area of Osaka after 1995 as people began to leave the area. As a result, currently, due to the lack of employment, it is now home to only 25,000 aspiring elderly workers. Of the aspiring workers, 1,300 of them are homeless. The employment options are few and far between—there are very few jobs available. The lack of technology and access to the Internet affects the ability for the unemployed to connect with employers and better paying jobs. Picking through garbage has become a common source of income for residents, allowing them to earn from $9 to $13 per day.

Unskilled laborers after the age of 50 rarely get work and do not qualify for government assistance until the age of 60, leaving a gap of 10 years without income or eligibility for government assistance—including healthcare. The prevalence of tuberculosis infection rate in Kamagasaki is three in every 100 residents.The rate of tuberculosis infection is estimated to be between 30 and 40 times the national average in Japan.

Kamagasaki is a poverty stricken area in Osaka, Japan, the country with the third highest growth of economy in the world. The area was given a new name decades ago: Airin-chiku.

Continued focus on Millennium Development Goal 1, eradication of extreme hunger or poverty, needs to reflect further progress in this area, regardless of what it is called.