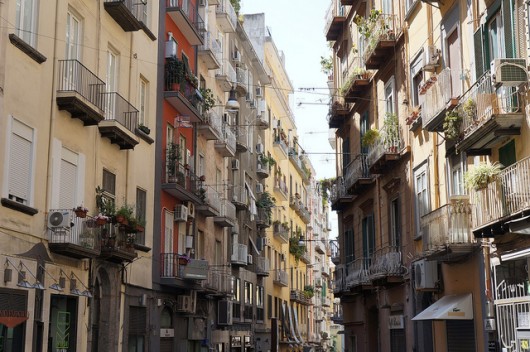 There is truth to the common stereotype that Naples, Italy is a poor and dirty city ruled by the mafia. Indeed, organized crime and political corruption have hampered the city’s development for decades.

Despite being a major tourist destination, Naples is one of the poorest cities in Europe. The city has an unemployment rate of about 28 percent, and some estimates even put the rate as high as 40 percent.

Across all of Italy, the economic situation has been on the decline. Ever since the 2008 recession struck, Italy has lagged behind the rest of Europe by a significant margin.

The poverty rate is the highest it’s been in at least 16 years. And matters are far worse in the south — where Naples is located — than in the richer north. Between 2011 and 2012 alone, poverty rose in the north from 4.9 percent to 6.2 percent compared to 23.3 percent to 26.2 percent in the south.

A recent study in Naples showed that only three percent of the population said that it was “easy to find a good job.”

Italy’s economic downfall has hit poor Neapolitans harder than most. The recession has forced a series of spending cuts. In 2010, the Campania region ended its minimum welfare program which delivered over 130,000 families into the clutches of poverty.

And those few Neapolitans who can find legitimate work have found the pay insufficient to support a family. The result has been a shocking increase in child labor.

Thousands of Neapolitan children have been forced to work just to keep their families afloat.

After his father suddenly died of cancer, 10-year-old Gennaro had to drop out of school and begin work as a shop assistant. He wakes up every morning at 7 a.m. and begins his work carrying boxes and crates for less than a euro an hour — which is significantly more than his mother earns.

He and his family live in a tiny 35-square-meter apartment in downtown Naples. Their story is becoming an increasingly common one for the area.

As bad as child labor is, the more menacing case is when the kid drops out of school to work for the local mafia. The Camorra crime family — which runs Naples’ lucrative and dangerous black market — is infamous for employing child soldiers.

The mafia in Naples has built up an army of young pickpockets and enforcers. Take for example 12-year-old Marco, who was drafted as a pickpocket when his family fell into debt with mafia loan sharks. Camorra made Marco drop out of school and join their ranks, where he then became addicted to cocaine.

The crime-ridden state of affairs in Naples has made one in five locals say they “rarely or never felt safe” in their neighborhood.

While Italy’s economic crisis has played a large part in the misfortunes of Naples, it is the rampant organized crime that is primarily to blame. For a long-term, sustainable fix to poverty in Naples, the mafia’s grip on the city’s politics must be eliminated.