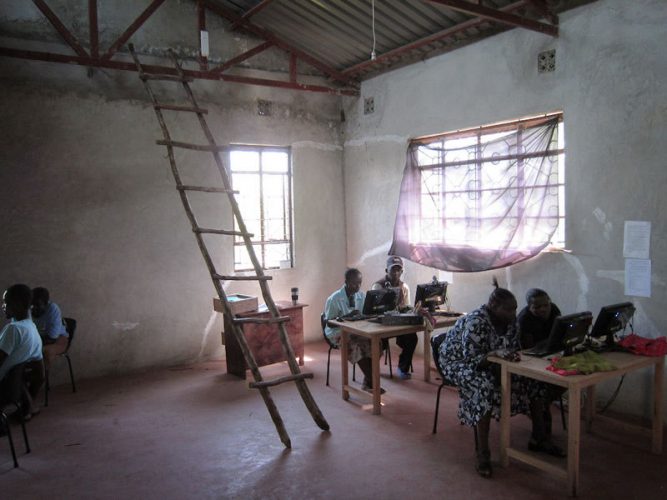 Most technology is limited in Mfangano, a fishing community off the Kenyan shore of Lake Victoria. The first time a car drove around the entire island was in 2007. Islanders only receive spotty coverage from cell providers due to the difficulties of building cell towers on Mfangano. Providers face difficulty constructing links from the mainland, and islands perceive key construction platforms as sacred.

Worst of all is the lack of internet access.

Chas Salmen, the director of the Organic Health Response (OHR), a small Kenyan NGO that provides HIV/AIDS-related services, noted the Islanders’ repeated desire for internet at community meetings. OHR started the meetings as a means to educate the public about HIV/AIDS and encouraged feedback in order to understand the lives of the islanders.

One of OHR’s primary difficulties was getting a substantial proportion of the community to attend the meetings. This was solved when OHR built the Ekialo Kiona Center (EK). The EK has a computer center, library and training facility. “Ekialo Kiona” means “Whole World” in the Suba language; the name refers to the OHR’s policy of allowing anyone access to the EK and the internet in exchange for maintaining a schedule of HIV tests every 6 months.

Participation in OHR’s programs has grown rapidly with the internet incentive. Now over 2,000 participants, or 10 percent of the population, use the EK and attend the regular meetings.

“The timing of the project was just perfect,” said Salmen. “It went live just before schools closed for a one-month break and we had 250 secondary students enroll right away. 75 percent of our new enrollment has been young people, under 25. They engage with us in a way that wasn’t possible before.”

The OHR also set up a network-connected radio transmitter to broadcast, which has greatly increased the amount of the population on the receiving end of their educational messages.

Salmen said, “When we broadcast we get SMS messages from a huge area, including Kisumu, 90km away. EK Radio fan pages have started appearing on Facebook without any prompting on our side. It’s a total game changer to start those conversations and have everyone listening at once.”

Broadband connectivity is not a high priority for those aiding developing communities. But, as Cisco’s Senior Vice President of Corporate Affairs Tae Yoo noted, it creates jobs, higher productivity and ultimately enables economic and social development.

The United Nations now classifies broadband as a basic human right because it helps developing communities advance economically and socially. Yet, UNESCO estimates that 90 percent of communities in developing areas are without access to broadband.

Inveneo has launched the Broadband for Good Initiative (BB4G) to speed up access to broadband throughout the developing world. BB4BG uses low-cost technologies to deliver broadband into urban and rural areas. BB4G currently provides broadband access to 20 percent of rural Haiti, and certain areas of Micronesia, Kenya, Uganda and the West Bank of Palestine.

“Mfangano is a great pilot for building sustainable broadband networks,” said Eric Blantz, senior program director for Inveneo. “The challenges we’ve seen here are not unique, but the solutions we’re finding are innovative and replicable across the developing world.”