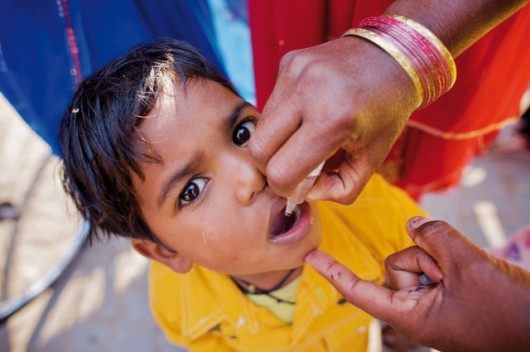 On March 27, 2014, the World Health Organization (WHO) certified that the South-East Asia region, home to a quarter of the world’s population, was polio-free.

The beginning of the WHO Global Polio Eradication Initiative (GPEI) in 1988 was faced with 350,000 cases of poliovirus infections, in 125 countries worldwide. This 2014 achievement now means 80 percent of the world’s population is polio-free.

Mass immunization efforts are the most effective when dealing with the spread of the poliovirus. In the Horn of Africa, it has been over one year since the last reported case of Polio due to the synchronized efforts to vaccinate every child with the oral polio vaccine (OPV).

The June 2015 Horn of Africa outbreak assessment deduced that poliovirus transmission has been interrupted.

Nigeria is currently the last country in Africa with the poliovirus, however, they are making progress. In 2013 there were 49 reported cases of polio, however, this year Nigeria has reported only six cases.

This dramatic drop in poliovirus infection is due to the OPV for type 1, 2 and 3 polioviruses. Vaccines are also administered to children of all ages and even at birth.

In February 2015 the Inactive Polio Vaccine (IPV) was introduced into the immunization program. It is predicted that by September 2015, Nigeria could be removed from the WHO’s list of polio-endemic countries.

Poliovirus lives in an infected person’s throat and intestines and is spread through feces especially in unsanitary environments. Even though some persons infected with the poliovirus do not show any symptoms they can still pass on the virus. Moreover, there is no cure for polio which is why immunization is the most effective method to stop the spread of polio.