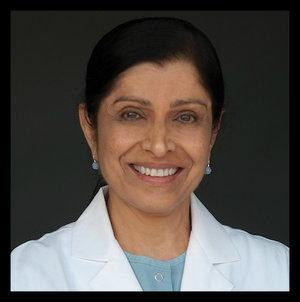 As a young child, Dr. Aisha Simjee contracted Trachoma, an eye disease that can lead to blindness if not treated.  Dr. Simjee grew up in Burma and as a 7 year-old was being prepared for a life as a housewife when she contracted the disease. She was cured by a folk remedy that consisted of having a local women squirt breast milk into her eye. The experience led Dr. Simjee to a life mission-healing the blind.  Her fascination with eye health led her to immigrate to the US and study to be an ophthalmologist in Orange Country, CA.

Now in her sixties with two grown children, Dr. Simjee has written a book reflecting on her life experience.  The experiences of a youth growing up in Burma impacted her and motivated her to do more than simply be a good doctor. She wanted to prevent blindness and eye disease in the world’s poor. Her book, “Hope in Sight: One Doctor’s Quest to Restore Eyesight and Dignity to the World’s Poor” tells of her journey and includes decades of personal journals and accounts from friends, families, and colleagues.  She wrote the book to motivate others to give back and encourage other young ophthalmologists to help others.

The World Health Organization reports that over three-quarters of all blindness worldwide can be prevented or treated.  Around 285 million people are visually impaired due to various treatable causes and about 90% of the world’s visually impaired people live in developing nations where there are little or no welfare services. Dr. Simjee has seen firsthand how eyesight can be a matter of survival.  She has served on more than 25 medical missions, often putting her private practice on hold and paying her own expenses.  Her trips have spanned Asia, South America, Eastern Europe, and Africa.  The 69-year-old persists  in taking the trips and she often serves in rural areas.  Her mission is not to travel to well-equipped capital cities, but to the villages miles and miles away from modern civilization.

She has worked with children suffering from wounds from knives, people who have walked miles to see her, prison inmates, and indigenous Indians.  Her goal is eyesight and helping people regardless of status. Her book focuses on hard facts and short anecdotes about her travels and the experiences she has had.  Dr. Simjee wants to motivate others to give their time and money to help others.  Dr. Simjee is a wonderful example of someone using their talents to serve the world’s under-resourced. Check out her book from White Spruce Press.