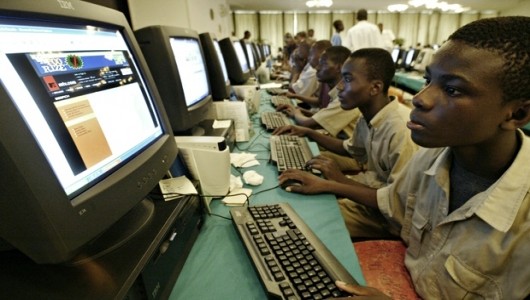 The economies of African nations are growing at levels never before seen, but so is the continent’s youth population. As a result, job creation is at a critical point.

For Africa to maintain its current growth trajectory, it’s estimated that 400 million people under 25 will need viable employment by 2050.

Unemployment isn’t a concern solely in Africa, however, as the U.N. reported in 2014 that global unemployment hit over 201 million people, with a large percentage of these people being women and children.

With rising levels of unemployment, the Internet is starting to play a large role in helping create jobs, especially for populations in Africa. One organization, the Rockefeller Foundation, started its own initiative to jumpstart employment opportunities in certain African nations.

The foundation launched its Digital Jobs Africa program in 2013, with the goal of creating sustainable jobs focused on information communications technology for the youth in Africa.

Specifically, the foundation wanted to have a positive effect on at least one million lives in Egypt, Ghana, Kenya, Morocco, Nigeria and South Africa.

Digital Jobs Africa emphasizes three pathways used in its approach: generating digital jobs in assorted sectors by building promising business environments, prioritizing the hiring of youth in the private sector, and partnering with organizations that provide job training to help make sure the youth have the necessary skills for these jobs.

In starting Digital Jobs Africa, the foundation partnered with the World Bank Group. Since doing so, the two organizations have done lots of work to boost digital job creation opportunities in Africa.

The Rockefeller Foundation and the World Bank Group focus on the Internet because of the impact it can have on the traditional ways of working.

Using the Internet in the workforce creates new opportunities; it therefore has the ability to change lives for the better in both developed and developing nations.

By using the Internet, employers can extend jobs and reach talent on any corner of the globe. People can also work from anywhere.

This strategy is a business model referred to as online outsourcing, or online work.

The World Bank Group was the first organization to take a deeper look into online outsourcing, as it carried out the first comprehensive study having to do with this particular business model. It was called “The Global Opportunity in Online Outsourcing.”

The results of the study, which the World Bank Group did in partnership with Dalberg Consulting and with support from The Rockefeller Foundation, were released in June.

The group wanted to help connect governments, companies and people to online outsourcing, which it did by completing the study.

The study was released side-by-side with a web-based toolkit that can, according to the World Bank Group’s website, “diagnose the feasibility for establishing the online outsourcing industry in developing countries, in order to increase access to employment and income-generation opportunities.”

In the study, the group analyzed experiences people had with online outsourcing in different parts of the world and how it could impact job creation, economic growth and social inclusion.

In doing so, the World Bank Group recommended policy ideas for developing countries to allow them to use online outsourcing as leverage for promoting inclusive growth. It also explained what possible tasks could be available through the business model and which skills were necessary to be successful.

The influence of online outsourcing is expected to grow, as estimates say that by 2020 the market size could hit between $15-$25 billion and have the potential to employ 30 million registered workers.

So how can companies and workers benefit from online outsourcing?

For starters, it gives employers wider access to specific skill sets and faster hiring. It also allows for productivity around the clock, as companies can have workers all over the world.

In terms of societal impact, online outsourcing has the ability to push social change for women.

In India, for example, women who take care of children and elderly family members can make money while at home by having an online job. In Egypt, women can use online outsourcing instead of having to go to workplaces dominated by men.

But online outsourcing isn’t a lucrative alternative to the traditional ways of working just because of flexibility – it could also be the more profitable option.

One aspect of the study conducted by the World Bank Group found that in Kenya, Nigeria and India, full-time online workers earned a salary equal to or greater than their counterparts in a traditional workforce.

Not only can online outsourcing lead to higher wages, but through its flexibility, inclusiveness and innovation, it also has the ability to reach women and youth. This is proof that the Internet can boost economic growth and drive social inclusion.

Sources: The Rockefeller Foundation, The World Bank
Photo: The Guardian