Tag Archive for: One for One Campaign 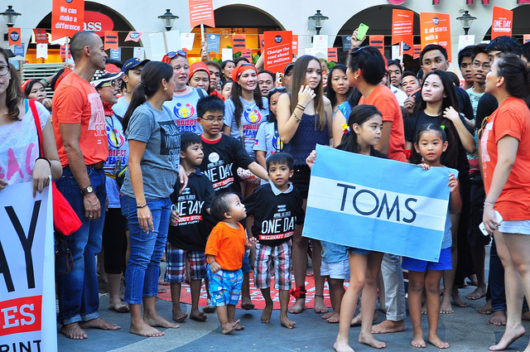 When it comes to global poverty, the solution should involve collective effort from different organizations and individuals as well. These involve various participants from volunteers and nonprofit organizations to the government or even celebrities who are contributing their time to raise public awareness and much more. In fact, even private sector fighting poverty via Corporate Social Responsibility (CSR) is crucial too.

Many large businesses and corporations are doing their bit for the world. Examples of private sector fighting poverty are not only motivational but also help to eliminate the sources of and causes leading to global poverty. Each year, different companies take action to do what is necessary for their community. The concept was introduced in the 1800s when the U.S. Supreme Court stated that corporations are people and they should be good citizens.

There are several ways for companies to practice Corporate Social Responsibility. Environmental efforts, volunteering, ethical labor practices and philanthropy are some of the examples. The private sector fighting poverty is reflected in many of the world’s biggest and most profitable businesses. CSR has become so critical that, for example, in the U.S., more than 60 percent of citizens hope that business will drive social and environmental changes in the absence of government actions and regulations.

Print giant, Xerox, has been focusing on different social areas with many projects, but it’s most recognizable one is the Xerox Community Involvement Program. Through this program, Xerox encourages its employees to work on social projects of their choice. They can also get a paid leave of absence to focus on their respective projects.

Another company that has been running several projects for the social good is the shoe company, Toms. Their well-known project One for One Campaign came into existence after the company’s founder, Blake Mycoskie, witnessed the difficult life of Argentinian children who grow up without wearing shoes. The idea of the project is really simple: Toms provides shoes to the children in need in 60 countries as it donates one pair of shoes for every pair of shoes sold.

Microsoft is another company taking responsibility for social issues. According to Forbes, the company holds the second highest rating on CSR score for all their educational and environmental contributions worldwide. It’s also known that the company’s co-founder and former CEO, Bill Gates, started the Bill & Melinda Gates Foundation to combat infectious diseases, promote equality, empower the poor and much more.

How CSR Benefits the Private Sector

Numerous big giants such as the BMW Group, Google, Samsung, LEGO Group, The Walt Disney Company, etc., have been taking action. Many of these companies benefit from their CSR as well. For example, Google Green is a social effort geared toward using resources effectively and increasing the use of renewable power. Ever since this cultural change occurred, Google’s data centers’ power requirements have reduced by about 50 percent. This means that what is saved by a social project can now be used for other operations.

Fighting global poverty and its causes needs to be a collective effort and the involvement of the private sector is highly crucial.