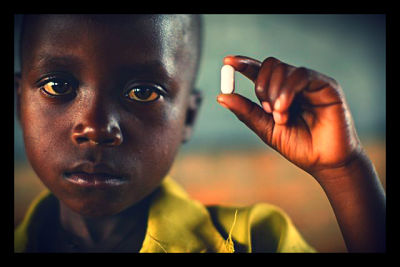 Neglected tropical diseases (NTDs) affect 1 billion people, or one out of every six individuals, every year. Half a million people die from NTD related effects, the majority of whom are impoverished children, women and persons with disability. Although methods of prevention and treatment are available, these diseases remain extremely common in parts of Africa, Asia, Latin America and the Caribbean.

The following list of NTDs represents approximately 90% of the global NTD burden, along with methods of treatment and prevention.

Also known as “river blindness,” this disease is transmitted via black flies carrying the onchocerca volvulus parasite. The parasite causes debilitating itching and upon reaching the eyes, visual impairment and eventually blindness. It is the second leading cause of infection-induced blindness, behind Trachoma, with 37 million people infected with the disease.

A single, annual dose of Mectizan controls the disease and relieves symptoms. Some countries in Latin America successfully eliminated disease transmission after administering the drug for twenty years which lends hope to its possible elimination in the African continent.

One of the oldest infectious diseases known to mankind and the leading source of global blindness, is caused by the bacterium Chlamydia trachomatis. Eye-seeking flies transmit the disease from an infected person’s eye discharge to uninfected hosts.

Repeated infections result in a scarred interior eyelid thereby forcing eyelashes to turn inward thus scratching the cornea, all of which is followed by blindness. It affects about 21.4 million people, of whom 1.2 million are blind.

It is hyperendemic in remote poor rural areas of Africa, Central and South America, Australia and the Middle East.
The World Health Organization (WHO) recommends the SAFE strategy (Surgery, Antibiotic treatment, Face washing and Environmental changes) to limit its spread.

Or, snail fever, is a parasitic disease transmitted by freshwater snails to bathing or swimming humans. Urniary schistosomiasis progressively damages the bladder, ureters and kidneys. Intestinal schistosomiasis enlarges the liver and spleen, damages the intestines and creates hypertension of the abdominal blood vessels. It affects 200 million people, and in children can impair growth and cognitive development.

A single dose of praziquantel with repeated community distribution treats and controls the disease.

Affects more than 880 million children around the world. The intestinal worms may result in diarrhea, abdominal pain, anemia, general malaise and severe infection can impair growth and cognitive development.

Improved sanitation, health education and the periodic administration of anthelminthics to at-risk groups limits the rate of transmission.

Also known as elephantiasis, is a mosquito-borne disease which results in painful swelling of the limbs and genitals. Over 120 million people are currently infected and nearly 1.4 billion people are at risk in 73 countries.

The WHO recommends yearly large-scale Mectizan and albendazole doses for four to six years to interrupt transmission.

This information was compiled from the Neglected Tropical Disease NGDO Network, World Health Organization and the Center for Disease Control.