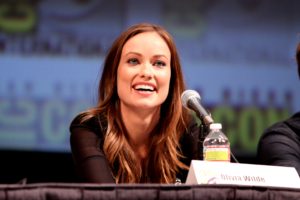 Actress, Olivia Wilde grew to fame for her role on one of the world’s most-watched television shows, House. However, she is also known for her role as a humanitarian. She has worked in Haiti, as well as produced her own documentary highlighting crises in various developing countries. She seamlessly transitions herself between the glamour of Hollywood to nonprofit work in the developing world.

Wilde recently participated in a PBS documentary and movement known as Half the Sky. Half the Sky is a movement aimed at igniting the change necessary to eliminate the oppression of women and girls worldwide. The Half the Sky movement was started by Nickolas Kristof and Sheryl WuDunn. Kristof and WuDunn wrote a book by the same name, which focused on turning oppression into an opportunity for women worldwide.

The movement uses videos, websites, games, and educational tools to spread awareness of women’s issues as well as to help create solutions to empower women. The video series is a four-hour series broadcast on PBS and other international channels. It was shot in ten countries and includes several celebrities such as Olivia Wilde, America Ferrara, Meg Ryan, and Gabrielle Union. The series displays portraits of women and girls living in some of the worst conditions imaginable, yet fighting to improve and change them.

Wilde appears on the second night of the series. She traveled to the Umoja Women’s Village in Kenya where the women of Umoja make beautiful handmade beaded items. The women in the village depend on the sale of their beaded items to support themselves and their families. The profits fund community projects selected by the women including scholarships for young girls, teacher’s salaries, lunches for preschoolers, and a freshwater and health care project.

Wilde also traveled to visit Jamii Bora. Jamii Bora is a micro-financing organization providing small loans to women in extreme poverty to start their own small businesses.  The organization has an incredible success rate, helping women escape poverty and establish themselves independently.

The series hopes to raise global awareness of extreme poverty and hopes to educate and empower women worldwide to help each other out of poverty. The movement spreads a strong message of hope and progress.

– Caitlin Zusy
Source: Half the Sky