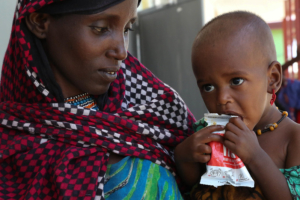 Around 45% of deaths among children under 5 years of age are related to malnutrition and most of these deaths occur in low- and middle-income countries, also known as developing countries. Seeking to counter this statistic is Plumpy’Sup, one of the latest innovations in nutritional science. Plumpy’Sup fights malnutrition through its one-per-day sachets that provide a convenient and accessible route to necessary nutrients.

Since one or more forms of malnutrition impact every single country in the world, fighting malnutrition has become a global issue. In 2020, the WHO estimated that, globally, more than 149 million children under 5 suffered stunting, 45 million endured wasting and 38.9 million were overweight.

Links Between Poverty and Malnutrition

Another threat that malnutrition posed is its strong relationship to poverty. This concerning link between poverty and malnutrition is cyclical, as malnutrition reduces the population’s economic potential in order to induce poverty. In turn, poverty reinforces malnutrition by increasing the risk of food insecurity. This explains why areas with chronic poverty have higher malnutrition rates. Thus, although malnutrition reaches the entire world, those living in poverty face an even more significant burden.

The relationship between malnutrition and poverty particularly concerns children. Micronutrient deficiencies may result in adverse birth outcomes such as low birth weight babies. These babies have an increased risk of impaired health and educational performance. Such impaired health, including illness susceptibility, contributes to poverty due to increased health care costs.

Additionally, poor educational performance in malnourished children may result in less schooling. Since education is a known pathway out of poverty, such decreased education contributes to the cyclical nature of poverty.

The Formula for Success

Hope in the fight against malnutrition can be found in Plumpy’Sup, a Ready-to-Use Supplementary Food (RUSF) that Nutriset designed to treat moderate acute malnutrition in children older than six months. Plumpy’Sup fights malnutrition using a peanut formula that comes in one-per-day sachets that are ready to eat and that people can consume in small quantities to supplement a regular diet. The ingredients in the formula include iron, sodium, vitamin A, vitamin D and more.

Plumpy’Sup is a flexible product that can treat malnutrition in various contexts, according to Nutriset’s website. Plumpy’Sup typically fights malnutrition in emergencies but one can also use it at home or in nutritional programs. The lipid-based dietary supplement, which has a high vitamin and mineral content, could provide hungry families with an option for fighting malnutrition in areas without electricity or clean water.

Ultimately, as Plumpy’Sup fights malnutrition, it provides a glimmer of hope for feeding the malnourished and stopping the cycle of poverty. Despite the pervasiveness of malnutrition, innovative food products such as Plumpy’Sup could be the start of a new chapter in global food security.