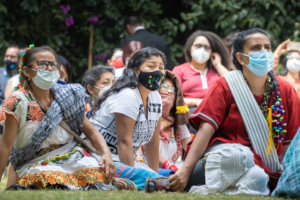 The fight for women’s rights and gender equality in Mexico has come a long way but still needs improvement. Currently, the country still presents many challenges and obstacles for women to achieve equality. Mexican women face verbal and sexual abuse daily.

Recognizing the dire need for change, several non-governmental organizations (NGOs) are working hard to empower Mexican women. They are advocating for more women’s participation in politics and government. Here are some NGOs leading the fight for gender equality in Mexico.

Fondo Semillas (“Seeds Fund”) is a nonprofit feminist organization based in Mexico. It focuses on improving Mexican women’s lives. The organization’s overarching mission is to create an equitable country where women can make their own decisions.

Launched during the 1968 student movement in Mexico City that represented a breakthrough for young Mexican women, Fondo Semillas seeks to mobilize domestic and international resources. To do this, it seeks institutional, corporate and individual donors. The organization also collaborates with other feminist groups to advance women’s rights.

Rather than coming up with short-term solutions, Fondo Semillas targets the roots of the problems and builds structural policies to address the issues. Through this work, Fondo Semillas has four key gender equity goals. These are protecting women’s bodies, preserving the women’s relationships with nature, advocating for job opportunities for women and preserving women’s identities in the country.

The Simone de Beauvoir Leadership Institute (ILSB) is a feminist Mexican non-governmental organization (NGO) that endeavors to strengthen social leadership and citizen participation for women. The organization’s goal is to enhance justice, equity and gender equality in Mexico by helping feminist leaders and activists influence policies. ILSB also focuses on empowering women to demand progress. To advance these goals, ILSB aims to build a culture of activism and knowledge for women. Further, it strives to establish alliances between leaders who value gender equality in Mexico.

Through its advocacy projects and digital campaigns, ILSB is notable as a gender equality trailblazer. In short, the NGO wants to create female leaders who have a commitment to social justice and gender equality. Through these activists, ILSB hopes to change of realities of discrimination and inequality in Mexico.

Nuestras Hijas de Regreso a Casa (“May Our Daughters Return Home”) is an organization that strives to fight against femicide in Mexico. Founded after the murders and disappearances of Mexican women in the State of Chihuahua, Nuestras Hijas de Regreso a Casa hopes to demand justice for women by focusing on returning the bodies of victims to their families for a proper burial. It also strives to bring aggressors to justice.

The organization attempts to advance these goals by providing legal guidance and social justice support for families whose daughters disappeared. It addresses both physical and mental health issues of affected family members. Not only does Nuestras Hijas de Regreso a Casa inform the state government about any human rights violations but it also demands more accountability from the government. It does this by asking the government to allocate resources for women who femicide affects. Through these works, Nuestras Hijas de Regreso a Casa addresses the ongoing problem of femicide and fights for advancing gender equality in Mexico.

Las Libres is a feminist organization with the primary mission to promote women’s human rights and to demand respect for women’s rights across Mexico. The organization specifically aims to provide women with access to legal and medical services. It also focuses on empowering indigenous, uneducated or low-income women.

Las Libres conducts educational workshops for women in marginalized communities. These aim to build awareness of women’s rights and create a safe environment for women to exercise their rights. They also offer legal and medical support for women who are victims of gender-based violence. Through this work, the organization envisions a future for gender equality in Mexico.

PSYDEH is a feminist, grassroots Mexican nongovernmental organization (NGO) that empowers rural and indigenous people with training in human rights and citizen development.  Further, it helps them to become leaders of their own marginalized communities. The NGO believes that change needs to come from the bottom up.

PSYDEH views women as central to families and societies. That is why the NGO presents women-led workshops to educate women on creating solutions to local problems. Further, the workshops teach women to utilize resources for improving their decision-making and their understanding of the law. By partnering with like-minded organizations, PSYDEH also helps women develop local projects for improving their quality of life. Through this work, the organization hopes to improve the self-awareness of Mexican women and foster solidarity between marginalized communities. Finally, it also aims to empower women to take action to better their own lives.

Gender inequality continues to pose problems for Mexico. However, these five NGOs are working hard to provide services and competency so that Mexican women can promote gender equality in Mexico.