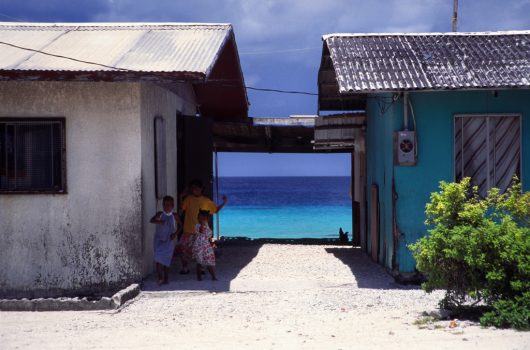 Poverty in the Marshall Islands

Poverty in the Marshall Islands is an urgent concern because of scarce natural resources, high unemployment rates and wealth inequality.

In the Marshall Islands, only 39.3% of the population aged 15 years and above is employed. For every one thousand babies born, 30 die before their birthday — the fourth highest in the Pacific region.

The Marshall Islands comprise about 750,000 square miles of ocean but only about 70 square miles of landmass. Even though people in Ebeye are surrounded by nothing but water, one of their major daily tasks is to search for clean water. Ebeye is badly polluted, and family members take turns sleeping because of the lack of land and money for housing. Constant floods threaten people’s homes and their possessions. However, a mere 30-minute boat ride away lies the Kwajalein atoll, which the U.S. army rents for the Ronald Reagan Ballistic Missile Defense Test Site. In this American middle-class neighborhood, scenes usually include people drinking cocktails and dancing in the warm Pacific breeze, while many of the neighboring islanders live on less than $1 a day.

The Marshall Islands were the testing site for the U.S. of their nuclear bombs during the Cold War. From 1946 to 1958, a series of 23 nuclear devices were tested in these islands. One of the bombs, Castle Bravo, which was a newly designed dry fuel thermonuclear hydrogen bomb, was denoted on an early morning in March 1954. It was a thousand times more powerful than the atomic bomb dropped on Hiroshima during World War II.

Two atolls were destroyed because of the series of nuclear testing. In 1956, the United States Atomic Energy Commission regarded the Marshall Islands as “by far the most contaminated place in the world.” Before the United States conducted its first test in the Marshall Islands in 1946, there were 167 people living on Bikini Atoll, and thousands living on nearby atolls. The Marshallese living on Bikini Atoll were displaced twice because of the testing, but the ongoing nuclear radiation has been causing long-lasting health problems for both the people and the environment — 40 years after the testing, studies still showed that “eating locally grown produce, such as fruit, could add significant radioactivity to the body.”

Floods and droughts are destroying the “islander lives” of the Marshallese. States of Emergency were declared when waves as high as three feet hit the cities and for droughts leaving six thousand people surviving on less than one liter of water per day in 2008 and 2013. If global temperatures rise by more than 1.5 degrees Celsius, the Marshall Islands may disappear. The Marshall Islands are some of the most vulnerable islands to the effects of climate change.

Direct U.S. aid accounts for 61.3% of the Marshall Islands’ $137.4 million budget for the fiscal year 2010. Under terms of the Amended Compact of Free Association, the U.S. is committed to providing approximately $70 million through 2023, including contributions to a jointly managed trust fund by the U.S. and the Marshall Islands. The Marshall Islands are renting the Kwajalein Atoll to the US Army, and their national defense is largely dependent on the U.S. On the flip side, the U.S. is benefiting from its unique and strategically important position in the Pacific Ocean.