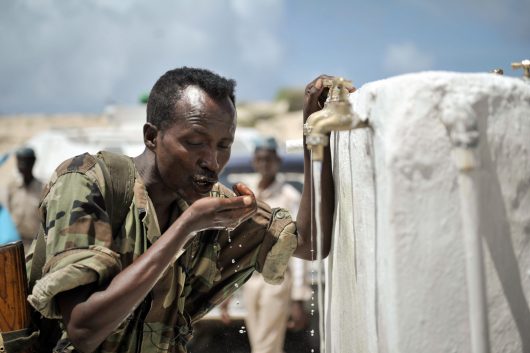 Access to clean drinking water is a growing problem. There are 2.3 billion people around the world facing water availability issues every day. Problems come from rising global drought patterns, lack of access to groundwater, water contamination, and waterborne illness. Almost a third of the global population does not have access to clean drinking water. A possible solution, called the Waterseer Project, may be hitting the market in late spring 2017. The Waterseer Project aims to increase access to water, as well as to treat the water through a distillation process.

So how does this Waterseer device actually work? There is no use of power or chemicals involved in the extraction of water from the air. A compact wind turbine directs air into a condensation chamber that is planted six feet below the earth, where temperatures are constant and cooler than above-ground temperatures. This temperature exchange condenses the water molecules into liquid form, and also serves as a distillation process to remove some contaminants.

The Waterseer Project was founded by Ikhlaq Sidhu in 2015. Preliminary research was conducted at the Sutardja Center for Entrepreneurship and Technology in Berkeley, California. They joined forces with the National Peace Corps Association (NPCA), who has been involved in the initial field trials at UC Berkeley and has agreed to additional trial runs in targeted countries where they operate. The project then joined forces with the Jacobs Institute for Design at UC Berkeley, where current developments on the second round of product prototypes are taking place thanks to their successful crowdfunding campaign. After the design phase and lab trial period in the late spring 2017, the prototype will be trialed in different outdoor field locations with the help of the NPCA.

The possible implications of this device are vast and far-reaching, but as with every potential development project, technology is only a part of the solution; policy, politics and management must all be aligned to ensure success.