Tag Archive for: Now You Hear Us 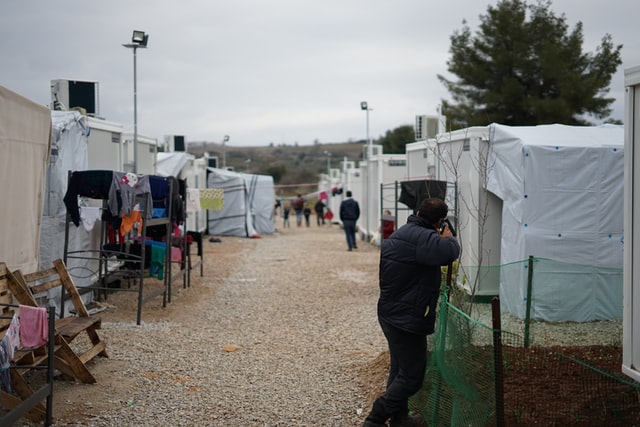 Youth UnMuted is a platform that empowers and raises awareness of displaced youth through artistic modes of storytelling. The non-governmental organization engages refugees and migrant youth in community centers and refugee camps through pop-up style workshops in places like Lesvos Island, Greece. Youth UnMuted also seeks to educate others about the refugee crisis. For example, a new way it has attracted attention to this issue is through a 360 Virtual Reality (VR) experience to offer a glimpse into refugee camps.

The immersive experience was born in one of Youth UnMuted’s 2018 winter workshops, and functions as an educational tool to completely understand the components of a refugee camp in Greece. The VR experience offers people the chance to observe “the voices of young people and the context in which they are forced to live.” It also hones in on child refugees’ stories by telling them directly. The VR experience was developed and filmed in a Greek refugee camp. Children in the camp chose the parts of the camp they wanted to share and posed within the scene. Additionally, they assisted with the photography used to develop the program to offer a glimpse into refugee camps.

While Youth UnMuted released the VR experience before the COVID-19 pandemic, it is still relevant in the current climate. It shines a light on the dire and unsteady circumstances of those living in the camps. Young victims of forced migration already face marginalization, and COVID-19 only enhances the situation. For example, already-present tensions in Greek refugee camps have heightened over confirmed cases of COVID-19 due to overcrowdedness that physically and mentally affects health.

Poverty is at the root of the conflicts that child refugees and their families flee from. A lack of resources in one’s country is often the main reason for relocation. COVID-19 has a devastating effect on global economies and is likely to cause further displacement.

The majority of displaced young people that Youth UnMuted meets in refugee camps are from Syria, Iraq and Afghanistan. This diversity can lead to some language barriers. However, the use of art in pop-up workshops has helped to mitigate this obstacle. It is the most impactful and cost-effective way to interact with children from various cultures.

In 2018, Youth UnMuted reached over 300 youth from May to June and more than 500 youth from October to December through its five-day workshops at refugee camps. The organization simultaneously raised nearly $19,000 in individual donations, $1,000 in grants and over $45,000 in Greek volunteer services.

The organization has tackled other projects, such as an online magazine that elevates refugee voices from Tijuana, Mexico and Greece, which currently has five issues. Amid the spread of COVID-19, Youth UnMuted has remained in touch with refugee camps. It provides pre-recorded sessions that teach mindfulness techniques and practices, gives writing prompts and provides ideas and themes for future in-person workshops. Youth UnMuted’s most recent project is Now You Hear Us, a podcast showcasing the voices of young people who have experienced displacement worldwide. Along with the VR experience, this project is a tool for education about migration and forced displacement. The podcast will feature newcomers in the United States, resettled youth in Canada, Youth Advisory Board members who now have asylum in Germany as well as young people in Greek refugee camps.

Youth UnMuted is an example of an organization seeking to educate others about the effects of forced displacement by giving people a glimpse into refugee camps. Through its efforts, many child refugees have found their voices.