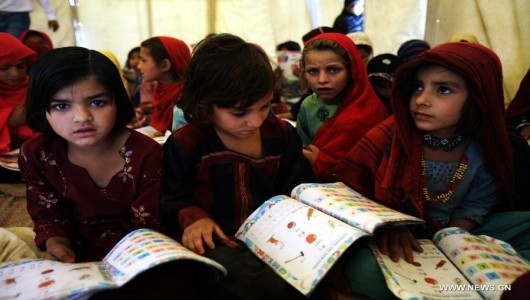 Education in Pakistan remains a challenge. For over a year, school children in North Waziristan, in the tribal region of Pakistan, have been on vacation. But this is not the kind of vacation anyone wants for their children.

In June 2014, Pakistan’s military operation Sharp and Cutting Strike, or Operation Zarb e Azb, began clearing the militants from the tribal areas, forcing families to flee to safer territories. The militants—the Taliban, Al-Qaeda and other foreign rebels—have been based there for more than a decade.

Nearly 10,000 school-aged children were part of the one million people who fled their homes. Many of these children have had no school at all for the past year. Others have attended school in make-shift “buildings,” sitting on the ground with a thatch roof over their heads. When a storm hit one such classroom, the winds blew it away.

Assistant Director of the Federally Administered Tribal Areas, Farman Khilji, said authorities are “doing what we can do. We have set up our own schools in camps. Our teachers from North Waziristan are now on duty.” With classes as large as 400 students, teachers are beleaguered and some give up.

It is not any easier for high schools and colleges. In the province of Khyber-Pakhtunkhwa, east of North Waziristan, Bannu Post Graduate College cannot accommodate another 5,000 students in addition to the 5,000 that they are already just barely serving. When Pakistan’s military allowed some families to stay in a few small areas of North Waziristan, high school students were allowed to take their yearly exams in Bannu. At the same time, the military imposed a 24-hour curfew making it impossible for anyone to leave their home.

Now, the military says the offensive is in its final phase after a year of fighting and killing more than 2,700 militants in North Waziristan. The military promises families that they can start returning to their homes. First, though, they must sign an agreement, an 8-page document called the “North Waziristan Security Agreement.” All tribal elders from both the Wazir and Dawar tribes agreed not to sign the document because it puts them in an impossible position.

The agreement holds them responsible for any militant attacks on the Pakistan army in the region. In fact, they must fight any enemies but are not allowed to keep any weapons. A Dawar elder, Gul Saleh Jan, summarized it simply, “How can we take responsibility for guarding the guard?”

Punitive measures for not upholding the agreement could include being barred from government jobs, having passports and other official documents revoked, and homes and businesses seized or destroyed. These punishments are based on penalties from the days when British colonial law governed the Federally Administered Tribal Areas (FATA). In reality, this law remains in effect today even after Pakistan became independent in 1947.

These punishments are severe but may be less severe than reckoning with the Taliban. President Obama has referred to the tribal region as “the most dangerous place in the world.”

Ten years ago, when the military was clearing the militants from other parts of the FATA, the Taliban and Al-Qaeda appeared in North Waziristan. While more than 10,000 government troops were stationed in barracks and checkpoints there, they made alliances with some factions of the Taliban. The tribesman felt caught in the middle: unable to deal with the militants yet powerless to ask the military for help. “If you said something, like asking why the Taliban were doing wrong things, then your head was cut off,” said Malik Atta Muhammed, a Wazir elder. “Eventually, there was no one left to question them.”

According to the assistant political agent for North Waziristan, Zaheeruddin Babar, the security agreement is based on the British colonial era law that governs the FATA. “In the tribal territory the tribesmen owning that land are responsible for the local security,” said Babar. The security agreement is just a reminder that now the area is not a conflict zone, and the government wants the tribes to continue to own their land, “…it is their responsibility according to the law of the land to keep peace.”

Seven tribal zones comprise the FATA, which was created by the British in 1901 when the area was part of India. After failed attempts to conquer these 27,000 square kilometers of land, the British entered into an agreement with the tribes. The agreement allowed the tribes to do as they wanted with the land as long as they allowed the British access to Afghanistan through a route in the tribal area. This law was the colonial rule that has not changed very much since that time.

Although nowadays the political agent is the administrator of the Pakistan government for the tribal regions, and each tribe is represented by tribal chiefs or elders, the tribesman do whatever they want—drugs, smuggling and other crimes, according to Imtiaz Gul, a Pakistani journalist and author of the book “The Most Dangerous Place.” Gul further explains that the tribesmen are “very behind the rest of Pakistan. People are set back in the middle ages. The mindset is very conservative.”

Not only do criminals and fugitives take refuge there, according to Gul, but it is also ripe for non-state agents because there are no employment opportunities. There is no legal justice system in the area. “And the common man in these areas doesn’t have a sense of justice,” he contends, “for them Islamic justice is their shortcut… very, very quick.”

Given the history of the region, it is difficult for anyone to estimate when this unscheduled school vacation will end. The Pakistan military is not reopening the North Waziristan tribal district until the elders sign the agreement. And the 103,508 displaced families are returning at a slow pace— only 400 families have returned home so far.