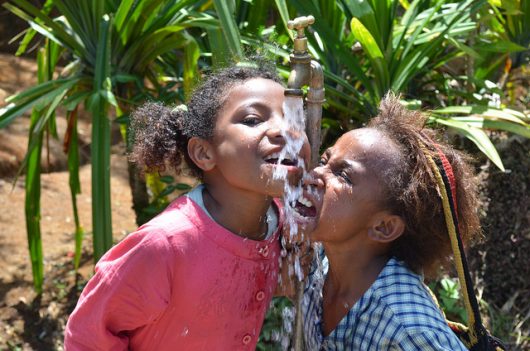 Since the 1990s, poverty in Papua New Guinea has been on the rise. With about 6.5 million people living in the country, more than 37 percent of the population lives on less than $1.25 a day.

According to UNDP, seventy-five percent of the population is dependent on agriculture. A large portion of the population lives in rural areas, where agriculture is the main source of income. Citizens living in rural communities don’t have access to electricity and adequate healthcare facilities.

UNDP supports the government in implementing new strategies with reducing poverty in Papua New Guinea as well as promotes equality among women and men. The organization is working towards creating a financial sector in the country to make more services affordable to citizens.

The healthcare system in Papua New Guinea has been struggling in the past few decades to offer quality health services. The rugged terrain, landscape of the country and lack of transportation systems makes it difficult for citizens living in rural areas to get to healthcare services in the urban areas. Malnutrition is one of the main reasons for infant mortality, which reached 57 deaths per 1000 live births.

Diseases also run high throughout the country and clean water is difficult to obtain. In fact, 4.8 million citizens do not have access to clean water in Papua New Guinea, and over 200 children under the age of five die from diarrhoeal diseases. Other disease such as HIV/AIDS and malaria are also top causes of death in the country.

Caritas is an organization that helps bring education, healthcare and community empowerment to people living in poverty in Papua New Guinea. In 2011, Caritas implemented a program that made sure that people living in remote or rural areas of the country have access to healthcare facilities that test for many diseases such as HIV/AIDS and malaria. Caritas also started a Life Skills program to help young adults struggling with HIV/AIDS and ex-prisoners that need a new start in life.

Papua New Guinea is ranked on the top ten list of countries with the most gender inequality. Women have unequal access to healthcare and education and are very underrepresented in government. There is also many violent crimes against women and children in the country, and sex trafficking is common.

Oxfam Australia strives for equality amongst men and women in Papua New Guinea by raising awareness about violent crimes against women to hopefully stop violence before it occurs. OxFam is supported by the Australian government through many provided programs such as Australian NGO Cooperation Program (ANCP), which offers quality support to survivors of crime in the country.

Not only do they help with crime victims, OxFam also provides clean water and hygiene services to people living in poverty in Papua New Guinea.

CARE is a nonprofit organization that has worked since 1989 to help eradicate poverty in Papua New Guinea. The organization responds directly to emergency situations such as natural disasters and droughts. They bring water, hygiene and sanitary services to areas that need it the most. CARE also assists with improving agricultural practices, education and disease prevention.

Missionaries and the Prospect of Prosperity

Aside from the many non-profit organizations focused on poverty reduction in Papua New Guinea, missionaries also work hard to bring their services to the country. Danny Markell of Douglasville, Georgia went on a mission trip with a traveling preacher to Papua New Guinea. Markell and the rest of the team traveled to Port Moresby and urban cities surrounding the capital to pass out food, water and other basic necessities.

“We gave out a lot of Bibles and coloring books for the kids,” Markell said. “We also helped out at two young camps.” Missionaries like Markell travel to the country every year to give citizens supplies, education and healthcare to make their lives a little bit easier.

Through their efforts and the work of the many organizations that provide assistance, there could be hope for the people living in poverty in Papua New Guinea.