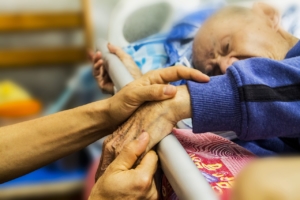 According to the Quality of Death Index, developing countries are typically “unable to provide basic pain management due to limitations in staff and basic infrastructure.”

However, Mongolia recently exceeded expectations, ranking 28 out of 80 countries in the 2015 Index. The country’s success is largely due to its National Palliative Care Program which was spearheaded by Dr. Odontuya Davaasuren.

Palliative care is defined as a multidisciplinary approach to medical care for people with serious illnesses.

According to the World Health Organization (WHO), 40 million people require palliative care each year especially in countries with aging populations and where the incidence of noncommunicable diseases is high.

In Mongolia specifically, 79 percent of deaths are the result of noncommunicable diseases such as cancer and cardiovascular disease.

However, turning a dream into a reality was no easy feat for the Mongolian doctor. Many of Dr. Davaasuren’s assertions were initially met with criticism during the program’s introduction.

For example, the use of opioids as a form of treatment was traditionally frowned up because health care providers feared that patients would become dependent on the drugs.

Per her IPCRC letter, the doctor held steadfast to her belief that “It is a human right to receive palliative treatment, even when the disease is not curable” and continued to work on introducing the program.

The National Palliative Care Program was created based on four foundational measures: public health policy changes, the indispensability of available drugs for palliative care, the education of health care professionals in palliative care, as well as the actual integration into the overall national health care system.

Notably, since 2005, all medical schools in Mongolia integrated palliative care into their education programs.

At the 67th World Health Assembly in January 2014, the World Health Executive Board called on health systems worldwide to improve upon their palliative care systems. According to the WHO, doing so is “fundamental to improving the quality of life, well-being, comfort and human dignity for individuals.”