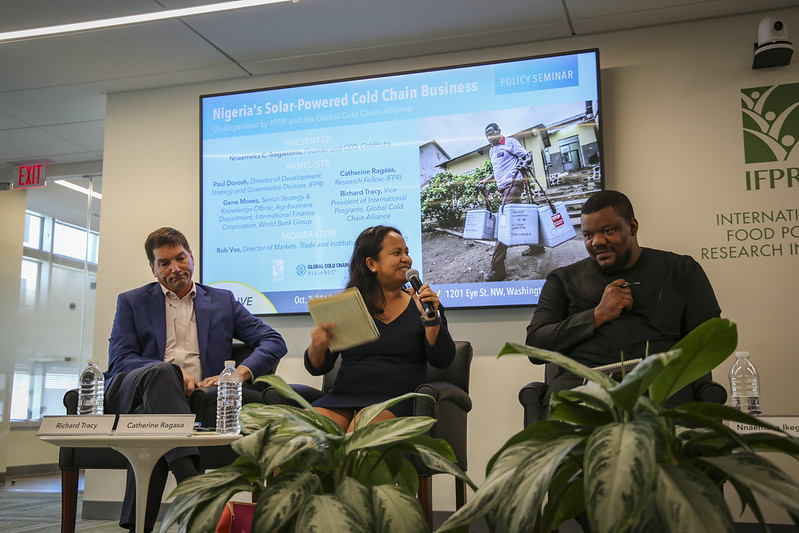 In sub-Saharan countries, post-harvest crop loss is so high that nearly 50% of fresh food never reaches consumers. These losses not only diminish the economic potential of the agricultural industry, but they also aggravate food insecurity, malnourishment and stunting in young children. In turn, poor nourishment decreases productivity in individuals, which is reflected by a 2% to 3% loss in GDP. So far, many countries lack a solution to this serious problem. This is where Nigerian company ColdHubs comes in.

The main culprit in post-harvest losses is spoilage, the natural process of decay and deterioration characteristic to perishable food items. While reduced temperatures can slow the pace of spoilage, sub-Saharan countries lack ample access to chilled storage spaces for produce. The small-scale farmers of sub-Saharan Africa who lack such storage face both financial and infrastructural barriers. While 62% of farmers cannot afford cooling technology, 36% do not have access to power in the first place.

In Nigeria, agriculture accounts for 22% of GDP and employs 36% of Nigerians. Nearly 90% of these Nigerians are small, family farmers. Yet large quantities of post-harvest losses pose a tremendous hurdle to their economic progress. For instance, Nigeria is home to the largest tomato production belt in West Africa. However, nearly half of the crop of tomatoes spoils each year. As of 2017, post-harvest losses in Nigeria cost up to $9 billion dollars annually. Meanwhile, more than 5 million people in Nigeria are food insecure. Two million children suffer from severe acute malnutrition, and 45% of all child deaths are due to malnutrition.

Cabbage in Nigeria: A Case Study

One company is working to make a dent in those statistics. In 2013, a radio journalist specializing in agricultural news was following the journey of cabbage from farms to markets in Jos, Nigeria. What the journalist, Nnaemeka Ikegwuonu, hadn’t anticipated addressing was the story of the cabbage post-market. Farmers abandoned the cabbage that didn’t sell, leaving edible food to rot. Ikegwuonu tracked down the farmers, asking why they had left the cabbage and how to avoid such a situation.

In a recent interview with The Borgen Project, Ikegwuonu recounted, “They actually told me that if there was a form of storage inside the market, that it would be very useful to them to actually store their produce and then come back in the next week to pick up their produce [for sale] when there is less cabbage in that market.” It was this moment that inspired Ikegwuonu to develop ColdHubs. The idea: 100% solar-powered, walk-in cold rooms for food storage, installed in Nigerian markets and farms.

The ColdHubs business model is simple. Farmers store perishable items in reusable crates provided by ColdHubs, using a flexible pay-as-you-store subscription. The crates then go into a ColdHub refrigerated room powered by solar panels. Each unit features enough solar panels to generate six kilowatts of energy every hour. However, the cold room itself uses up only 1.5 to 2 kilowatts per hour. This surplus allows for refrigeration to continue to run on rainy or cloudy days.

For a daily flat fee per crate stored, the solar-powered system allows farmers access to 24/7 chilled storage that operates entirely off the grid. This storage extends the shelf life of perishable foods from two days to 21 days. Importantly, this leads to an 80% reduction in post-harvest loss and a 25% increase in smallholder farmer income. For the 24 ColdHubs presently in use, some 3,517 smallholder farmers use the service. So far, ColdHubs has saved more than 20,000 tons of food from spoilage. Another 30 ColdHubs are currently under varying stages of construction. By the end of the year, the company hopes to have 50 ColdHubs fully operational throughout Nigeria.

ColdHubs looks not only to serve economic and renewable ends, but social ones as well. ColdHubs aims to employ women for its management and oversight operations. Thus far, the organization has created new jobs for 48 women. Additionally, ColdHubs is careful to maintain an affordable model ultimately aimed to support farmers over increasing profit.

“We designed Cold Hubs from a smallholder farmer from our perspective. I’m a smallholder farmer myself. The design was specifically suited so that the technology and service would be affordable,” Ikegwuonu explained. This manifests in the pay-as-you store model, as opposed to selling cold rooms outright. “We actually take up the risk of building in a cold room, and in three to four years we recover on that capital expenditure. It’s a slow, philanthropic process.”

Why It Matters Now

The proliferation of ColdHubs throughout Nigeria comes at a crucial moment, as farming seasons become more and more volatile. With prolonged heatwaves and an increasingly erratic rainy season, rain-reliant smallholder farmers struggle to raise  crops, predict growing seasons, and sell food before it rots.

“Once you harvest tomatoes, you have approximately 48 hours to sell it. With increased heat, it has actually reduced now to about 32 hours to sell that tomato.” Ikegwuonu added. With climate change in mind, ColdHubs operates with as much attention to its own climate footprint as possible. In addition to being entirely solar-powered, the cold rooms also use natural refrigerants. This reduces their contribution to atmospheric pollution.

Since approximately 54% of the working population in the continent of Africa relies on agriculture for income, ColdHubs could be a lifeline in the fight against hunger. The organization intends to bring its technology into other regions of Africa. As in Nigeria, it hopes to uplift smallholder farmers. “The future for us is to be running close to 10,000 ColdHubs in about five to 10 years, all across Africa,” Ikegwuonu shared. Once ColdHubs spreads throughout Africa, he hopes to bring the technology to developing countries across the globe.