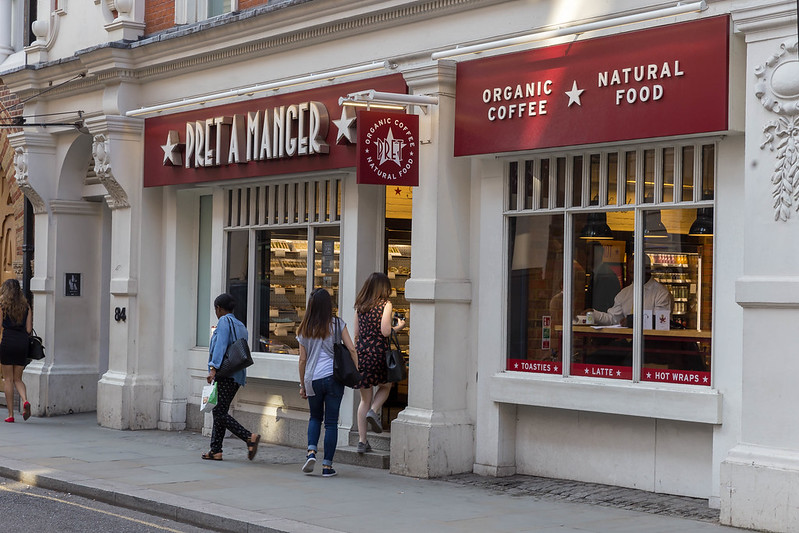 There is more to Pret A Manger than freshly baked pastries, baguette sandwiches and organic coffee. The international café franchise is headquartered in London, England, and has more than 450 shop locations around the globe, including 81 in the United States. Pret A Manger has shown dedication to alleviating poverty since the opening of its first shop in 1986. Pret A Manger demonstrated official commitment to the cause with its establishment of the nonprofit Pret Foundation in 1995. Ever since then, Pret A Manger has committed to combating hunger, supporting the homeless and striving for sustainability in every aspect of the business. Here is more information about Pret A Manger’s mission to alleviate poverty.

A History of Service

Julian Metcalfe and Sinclair Beecham first opened Pret A Manger with a commitment to sustainability and serving the community. “The work of the Pret Foundation in helping to address homelessness and poverty is really a huge part of the culture and history of Pret,” Nina Allard, global head of the Pret Foundation, told The Borgen Project in an interview.

Breadline poverty levels in Britain rose from about 17% to about 21% of households during the 1980s. Metcalfe and Beecham felt the need to act. They gave away the shop’s unsold food to the homeless every day at closing time, a legacy they continue today. The Pret Foundation has expanded that effort internationally, collaborating with and supporting charities in London, Paris and Hong Kong.

Allard has noted that, now, corporations are increasingly aware of their social responsibilities. “Companies are expected to look at how they can better serve society. I think Pret goes farther than that. For Pret, it’s not just a checkbox exercise, and that’s great,” she said.

Pret A Manger’s Mission to Help the Hungry

The Pret Foundation partners with other charities in the United Kingdom, as well as in France and Hong Kong, to distribute food to the homeless. These include Fareshare and The Felix Project in the U.K., Feeding Hong Kong in Hong Kong and the charities Epicerie Alimentaire, Rendez Leur Le Sourire, Secours Populaire and Restos Du Coeur in France. In collaboration with these partners, in 2020, the Pret Foundation donated £1.5 million worth of stock from Pret A Manger warehouses and 7.3 million Pret shop items globally.

Pret A Manger’s Mission to Help the Homeless

In addition to food donations to the homeless, the Pret Foundation initiated the Rising Stars Programme in 2008. This 12-week training program seeks to equip homeless individuals with the knowledge necessary to become Pret A Manger employees. “They follow exactly the same pathway as any other Pret employee. There’s just a bit more support in place,” Allard said.

Approximately 75% of the Rising Stars graduate from the program and nearly half of those graduates stay with Pret A Manger for more than a year. One particular Rising Star now has a 10-year-long career as an employee of Pret A Manger, now working as an assistant manager. Regardless of whether or not Rising Stars remain Pret employees, the skills they acquire through the program broadens their opportunities and brightens their futures.

The Pret House is an extension of this program, which provides Rising Stars with free housing. The Pret Foundation has partnered with the charity West London Mission St. Luke’s (WLM) in order to support Rising Stars holistically. WLM St. Luke’s advises them on how to open a bank account and assists them in properly managing their finances while improving their literacy and computer skills.

The Pret Foundation aims to scale up its initiatives. “We’d love to be able to recruit more Rising Stars,” Allard expressed. The team would also like to have more discussions with Pret A Manger employees and customers about the Foundation’s work, making it an inclusive and unified effort to streamline the initiative. The Pret Foundation is in the process of trialing cashless donation terminals in Pret A Manger shops. This enables customers to easily contribute to the cause.

Pret A Manger does not take its capacity to contribute to a more equal society for granted. The Pret Foundation continues to successfully uphold this responsibility.