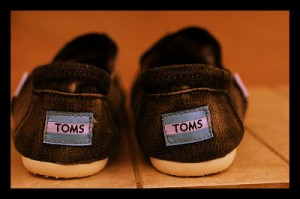 They’ve become a staple in the closets of many. The bright colors and eccentric patterns fill department store walls plastered with the signs “One for One.” TOMS shoes has become a well-known and very popular shoe brand over the years not only for the comfortable canvas slip-ons the company is known for, but also its promise to give back.

For every pair of TOMS shoes sold, the company gives away another pair to someone in need. This “One for One” philosophy has helped people throughout the developing world by providing them with footwear where they otherwise would not be able to afford such a luxury.

Despite its generous initiative, where the company has given 10 million pairs of shoes to children in need over the past seven years, many see TOMS’ do-good mission as a marketing ploy, rather than a genuine attempt at making a difference in the developing world.

In fact, because the company is for-profit instead of a nonprofit charity, the TOMS ‘One for One’ business model is purely just that—a tool for Western business expansion that undermines developing nations’ economies by not attacking the real roots of poverty. Instead, critics say that the company makes matters worse by undermining local footwear industries in the countries that receive the shoes.

TOMS founder Blake Mycoskie recently responded to criticism about his company’s motives as well as his own when he first created the brand.

“I didn’t come out thinking, ‘Hey, we’re going to solve the world’s problems. We’re focused on helping people that needed something that we can provide,” he said in an interview with the Huffington Post.

By providing children in the developing world with shoes, TOMS helps to promote education, as children in poorer countries are oftentimes required to wear shoes to attend school. Also the company helps to protect adult and children’s feet from cuts and infections which keeps them healthy.

The company also expanded its giving profile in 2011 to include eyewear, thus donating professional eye care treatment as well as eye glasses to people in the developing world in the hopes of decreasing the high amount of visual impairment in poorer countries.

Mycoskie also plans to take the company beyond shoes and eyewear hopefully by getting involved with micro finance initiatives, clean drinking water, education supplies, and hunger.

Recently, the brand has also promised to produce one-third of TOMS shoes in the countries where they are donated in order to create local employment.

However, Mycoskie has learned that no matter what he plans to do with TOMS, there will always be criticism.

“No matter what, you’re going to have someone who’s going to be critical. I invite those people to come on a trip and see the impact,” he said. 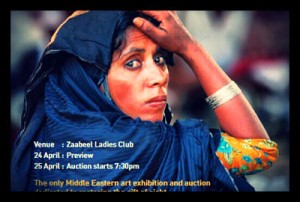 Participating artists included Abdulqader Al Rais, Najat Makki, and Fatima Lootah, and Her Highness Sheikha Latifa Bint Maktoum. A young artist, Aliya Hussein Lootah, donated a piece that was made in honor of the UAE’s 40th National Day and was signed by His Highness Shaikh Maktoum, Vice-President and Prime Minister of the UAE and Ruler of Dubai.

CEO of the Noor Dubai Foundation, Dr. Manal Taryam, gave thanks to the artists and reiterated the importance of the programs Art4Sight funds. “Providing the gift of sight aids both economic and social development in countries of need,” she said. In the last year, the foundation has helped raise AED 5.6 million (approx USD $1.5 million) to fund humanitarian and social aid programs to needy citizens and families living in the United Arab Emirates.

On the second day of the event, a panel discussion was held and addressed the specific topic of supporting art and philanthropy services in the UAE.  Participants in the discussion included eminent personalities such as director of the Easa Saleh Al Gurg Group and chairwoman of the Young Arab Leaders Muna Al Gurg.

With the success of the auction, the Noor Dubai Foundation is planning the third mobile eye camp for 2013 that will be held in Tamale, Ghana.