Tag Archive for: National Film Board 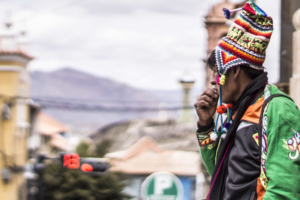 Modernization has been pushing Latin American indigenous communities into progressively smaller bubbles. This causes many to lose important aspects of their cultures such as language and tradition. On this same note, many international governments only provide federal funding to indigenous communities if they follow certain guidelines. This has made the preservation of indigenous cultures increasingly more difficult as the years go by. The preservation of indigenous cultures is of course important at its core. However, what is equally important is who is controlling the narrative.

Storytelling as a Possible Solution

Many people are interested in learning about Latin American indigenous communities. However, an ethical approach to this requires an administrative role in the production of any film depicting their culture. This important realization was introduced to the National Film Board in 1968 by the Company of Young Canadians and the National Film Board’s Challenge for Change program. This partnership saw the potential to elevate the voices of marginalized people, allowing them to control their own narratives and advocate for themselves.

August 9th is the International Day of the World’s Indigenous Peoples. To commemorate the occasion this year, the People’s Planet Program launched a new platform called Tribal Stories. This platform amplifies the pieces created by indigenous filmmakers in the A’i Cofan community of Ecuador and the Kīsêdjê community of Brazil.

Initially, the founder of the People’s Planet Program, Abdel Mandili, was interviewing indigenous community members to produce his own documentaries. However, he quickly realized the importance of allowing these communities to control their own narrative. He then transformed the People’s Planet Program into a nonprofit organization that focuses its efforts on providing indigenous communities with the tools to document their story and a platform to promote it.

The People’s Planet Program engages in educational workshops and provides film equipment to these communities. Nonetheless, it allows the communities to advocate for the causes important to them. For example, many indigenous communities find themselves on the frontlines of deforestation, pollution and other business practices that negatively impact their communities. They have pivotal insights that many other communities do not.

In tandem with this, the People’s Planet Program helps connect indigenous communities with political activists and legal counsel. They aid them in their fight for equal representation and land rights.

When engaging in international advocacy, it can be quite easy to fall into the trap of thinking that your actions always reflect your intentions. Most of the time, this is true. However, taking a step back and allowing marginalized groups to speak for themselves is a crucial aspect of international advocacy. An important aspect of advocacy is providing people with the tools to better their societies on their own terms.