Tag Archive for: Myths of poverty

In the beginning of 2014, The Bill & Melinda Gates Foundation published its annual letter. This year, the letter reported three common global poverty myths that the world needs to better understand in order to inspire change. Through the report, the duo explain why the myths are false and, ultimately, why U.S. foreign aid and outreach are extremely positive and worthwhile.

The reports on the first two myths were written by Bill Gates. The first explains the inaccuracy of the claim that poor countries will remain poor forever. The second attacks the idea that foreign aid is a waste of time and money.

Melinda Gates has made falsifying the third myth her mission, as her section of the annual letter identifies and clarifies the common misconception that overpopulation will result from saving too many lives.

The Foundation encourages their readers to share the ideas of the letter. In order to promote awareness of the truth about foreign assistance, the hashtag #stopthemyth has been developed. Using the “#” symbol, a popular search tool on social media sites, supporters can effectively share information on Twitter, Facebook and YouTube.

Global Citizens responded positively to the #stopthemyth campaign. In this video, the organization presents five false thoughts about poverty in Africa and illustrates the truth in a creative way.

The video is a testament to the power of the #stopthemyth label. By tagging their video with this slogan, creative minds at Global Citizen can pair with the Gates Foundation to spread ideas. Visit their channel here.

2. “You Decide: Save the People or Save the Planet #StopTheMyth”

Melinda Gates narrates a video that discusses her personal project in the 2014 report. The footage of children in the video is inspirational, and the information is clear and succinct. Added visuals also contribute to its effectiveness.

The video is a product of the Gates Foundation’s YouTube channel, which has produced many more short, yet informative, clips with reasons to “stop the myth.”

A large percentage of the American population recognizes Bill Nye the Science Guy as a trustworthy source of information. This video is no exception. In a creation of The Gates Notes channel (the YouTube account for Bill Gates’ blog gatesnotes.com) the popular science educator and television personality highlights truths about foreign aid’s place in the national budget. He also describes its potential effect on children of impoverished nations. 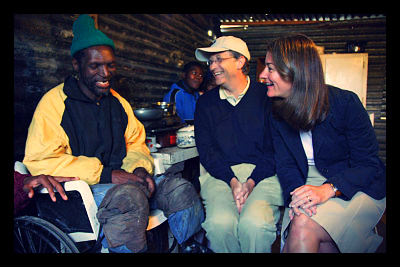 The Bill and Melinda Gates Foundation released its 2014 annual letter, which, rather than focusing on the foundation’s accomplishments over the past year or discussing its plans for the future, addressed three widely held beliefs regarding poverty.

The Foundation focused on eliminating these three myths: “Poor Countries are Doomed to Stay Poor,” “Foreign Aid is a Big Waste,” and “Saving Lives Leads to Overpopulation.” The letter deconstructs these myths, showing they are not only incorrect, but also highly detrimental to the progression of the fight against global poverty.

The idea that poor countries are trapped in a cycle of poverty is one held by people worldwide, especially those in the United States and other Western countries. While this belief that poor countries can never improve is deeply ingrained, it can be disproved through simple statistics.

In 1960, the majority of the global economy was focused in the West, with many of the countries across Asia, Africa, and Latin America counting as among the most impoverished in the world.

Today, many of the countries formerly considered irrevocably poor, such as Mexico, Turkey and Chile have rapidly growing and thriving economies and according to the Bill and Melinda Gates Foundation, “the percentage of very poor people has dropped by more than half since 1990.”

Many countries that were once viewed as “developing” such as China and India have come so far that it is difficult to continue viewing them as such, even for those who subscribe to the belief that poor countries are doomed to remain impoverished.

While people may find it easy to accept growth in countries in Asia as well as North and South America, they have a harder time believing that life in Africa will improve in the future.

The fallacy that the quality of life in African countries remains stagnant or decreases persists despite the fact that “7 of the 10 fastest-growing economies of the past half-decade are in Africa.”

In addition to growing economies, health care quality and availability both increasing throughout Africa. Since 1960, in spite of the AIDS epidemic, the life span of women in sub-Saharan Africa has increased by 39 percent from 41 years old to 57 years old. Education is improving as well, with over 75 percent of sub-Saharan children in school since 1970.

While not every impoverished country is experiencing drastic improvement, it is irrational to view all poor countries as the same. So long as there are not inherent geographical difficulties, such as those the landlocked countries in Africa face, or a government that impedes their growth, as is seen in North Korea, impoverished countries have the ability to improve exponentially.

Poverty will inevitably continue across the globe, but it will decrease significantly in scope and severity as it has done over the past several decades.

In addition to dissolving the misguided belief that poor countries will never improve, The Bill and Melinda Gates Foundation examines why this myth must be reevaluated. This misinformation harms the fight against global poverty because no one will support a cause they believe to be pointless.