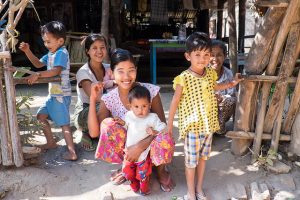 Myanmar, formerly known as Burma, is a diverse nation in Southeast Asia with more than 100 different ethnic groups in its population of 53 million. The nation has recently been liberated from an oppressive military junta that ruled the country from 1962 to 2011. Myanmar’s first democratic election in 2015 marked a critical turning point for the country. Amid this historic transition, Myanmar has multiple ongoing conflicts, and the country struggles with economic mismanagement. This unrest and financial difficulties may hinder the country’s development and leave a large proportion of the population in poverty, contributing to homelessness.

Even though poverty has declined substantially in Myanmar, about a quarter of Myanmar’s population still lives in poverty, and many among them are at risk of going homeless. According to the government’s 2014 census survey on population and housing, the number of people living in collective quarters or experiencing homelessness in Myanmar nears one million, or about two percent of the population at the time of the survey. Aside from the one million homeless people living in unstable living situations, there are 2.85 million others who have housing but whose living conditions are poor and whose units are built of easily damaged materials.

Since the country’s independence, Myanmar is attracting foreign investments that are transforming the country. However, the rush of investments has inadvertently fueled the property boom in commercial hubs like Yangon, raising the rents and causing increased homelessness. In 2014, the land prices had risen by 50 percent, and residential tenants had to pay up to 60 percent more rent compared to just two years prior. As the rent increases, many families are losing their homes and have to live on the streets. A new housing development created by the government also caused many people living on the outskirts of town to be forcibly evicted in 2014. Some of the affected households accepted the relocation deals, while many others rebuilt makeshift huts in areas nearby and live in anxiety of another eviction.

Myanmar is one of the most vulnerable countries to frequent natural disasters, including cyclones, earthquakes, flooding, and landslides. These disasters are accompanied by high social costs that significantly affect the poor and the most vulnerable population. In June 2018, a torrential rainfall left up to 7,400 people in Myanmar’s southern state homeless. The flood destroyed pagodas, houses, schools, and other public infrastructures that created $474,000 in damages. Later in August 2018, landslides and flood water damaged at least 100,000 acres of farmland and washed away the homes of as many as 140,000 people in southeastern Myanmar. Floods caused by monsoon rains hit Myanmar annually, and the damages these natural disasters cause are devastating. In 2015, Myanmar experienced its most destructive floods that ruined 15,000 homes and displaced upwards of 1.7 million people.

The chief minister of the Yangon region promised to accommodate the homeless population in Myanmar by establishing a housing board modeled after Singapore’s successful Housing and Development Board. The plan includes developing low-cost housing projects and aims to sell apartments to people in Yangon for monthly installments for a period of 20 to 25 years. The government is also receiving support from different international organizations to enhance its capacity to respond to natural disasters that displace thousands of families annually. In 2017, the World Bank approved the Myanmar Southeast Asia Disaster Risk Management Project that will contribute $116 million in financing efforts that reduce the impact of natural disasters, increase the resilience of facilities, and enhance the government’s capacity to respond to emergencies across the country.

In addition to governmental efforts, many international NGOs are becoming increasingly active in Myanmar to provide emergency relief and support the country’s long-term development. Plan Myanmar is one of many organizations that is working to raise awareness of disaster risks in communities to enhance their preparedness and capacity to respond to disasters through education. The organization works to integrate Disaster Risk Reduction (DRR) into the education system, and it is currently working with 96 schools in Myanmar to introduce DRR activities to help children as well as adults to better prepare for the inevitable natural disasters.

The industrialization that comes with the development of the country as well as annual disasters, both natural and man-made, are exacerbating the issue of homelessness in Myanmar. With the help of the international community, the government is making efforts to relieve the issue. Myanmar is developing more low-cost housing and enhancing its capacity to respond to natural disasters in order to address homelessness. – Minh-Ha La Photo: Flickr