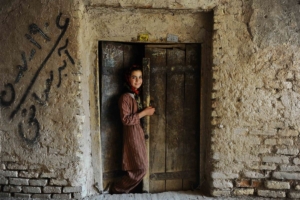 Afghanistan’s patriarchal society forces parents to make tough decisions as daughters are viewed as a burden while sons can earn money, care for their aging parents, and carry on the family legacy. To counter economic dependency on males and social stigma surrounding daughters, some Afghan families practice “bacha posh,” a centuries-old tradition reassigning their daughter’s gender at birth, which allows girls to experience the same freedom as boys.

Bacha posh girls are raised as sons. They dress in boys’ clothes and may go outside alone, bring their siblings from school, go shopping, and play a sport. These girls act as sons and do what the sons would do. While the roots of the tradition are unknown, it is becoming increasingly practiced.

Life For Girls In Afghanistan

Afghanistan is one of the most challenging countries to live in as a woman. Eighty-five percent of Afghan women have no formal education or are illiterate, 50 percent are married or engaged by the age of 12 and 60 percent are married by 16. Three decades of war have led to increased risk of rape and kidnapping of females which has prompted families to force child marriage. Some are forced into marriage to settle a dispute or repay a debt. Many men were killed in armed conflict, leaving the child brides as widows. Most young widows have four children to support and are often forced to beg or participate in prostitution. Child marriage increases the risk of health problems and death because of childbirth in the teenage years. Young wives are also more likely to be abused by their older husbands. Females also have lower legal standing and fewer economic opportunities. Women are hidden from society unless accompanied by a male relative and fully covered.

Widespread poverty encourages families to get their daughters married to avoid having to care for them. Afghanistan is one of the poorest nations in the world with 42 percent of both urban and rural populations living below the national poverty line. An additional 20 percent are at risk of falling into poverty.

In poverty-stricken families, bacha posh becomes a normal thing to do. Because boys have a higher status, they are more desirable. The tradition allows families to avoid social stigma affiliated with not having any male children by enabling their daughters to take on the role of a boy in society.

Life for bacha posh girls becomes difficult as puberty reveals their biological gender. The girls often face harassment, risks to their safety, humiliation, and separation from their communities. Others call them transsexuals and Anti-Islamic. Some girls even stop going to school because of the harassment. Families also want their girls to start dressing and behaving like women during puberty, but bacha posh girls do not want to live as a woman in a country that gives them little possibility after experiencing the freedom of males.

Women for Afghan Women, an Afghanistan advocacy group, sees at least two bacha posh girls’ cases at its women shelters throughout the country each year. Most girls, between the ages of 14 – 18, are struggling emotionally, mentally and financially.

USAID has had direct involvement in Afghanistan’s moves toward gender equality. While the problem of gender inequality remains, there have been positive strides in women’s health and education. Over the past 15 years, the life expectancy for a female in the Middle Eastern nation has “increased from 47 years old to over 60.” Female education has also seen a spike as 3.5 million girls are in school, and 100,000 attend university. USAID aims to continue to develop gender equality by assisting Afghan girls through programs offering support for survivors of sex trafficking, increasing educational opportunities, assisting female entrepreneurs with economic growth and infrastructure, and partnering with the Afghan government to focus on women’s rights.

Mullahs and volunteers from the United Nations have partnered together to travel throughout Afghanistan to conquer cultural and social norms to work towards gender equality in both rural and urban regions. The advocacy groups travel around the country in hopes to eliminate violence against women, increase female access to healthcare and education, and economic equality for women. Volunteers from the UN are working to strengthen the Enhancing Gender Equality and Mainstreaming in Afghanistan which hopes to bolster the Ministry of Women Affairs.