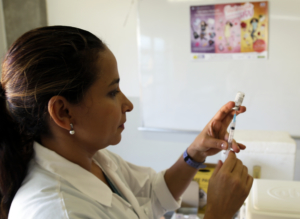 Vaccinations have been one of the most successful disease prevention tools the world has ever seen to date; the rise of vaccinations and a decrease in disease mortality go hand in hand. The World Health Organization is cited stating that vaccinations prevent about six million deaths worldwide every year. That number could increase if a new type of vaccine, an mRNA vaccine, proves effective.

Some of the more impoverished nations of the world encounter a variety of setbacks when trying to implement vaccinations on a wide scale. Some populations simply cannot afford vaccines while others living in rural areas may not have access or transportation to reach a medical facility. Further, others still may live in unsanitary environments that allow pathogens to easily thrive and spread throughout their communities. Fortunately, scientists in Germany have been testing mRNA vaccines that could have the possibility of eliminating some of these issues.

Last year, the Bill & Melinda Gates Foundation partnered with CureVac and BioNTech (two biotechnology corporations) to experiment with new ways to make vaccines. These new vaccines utilize the body’s naturally administered mRNA, which are the molecules that turn genetic information into proteins. In 2018, the companies found positive results while testing these vaccines on both small and large animals.

Later that year, mRNA vaccines designed to combat rabies began phase I of their testing on human participants. The testing took place in Germany and involved 130 participants who had not yet received a rabies vaccine in their lifetime. Then the results of the mRNA vaccine were compared with the results of another treatment.

“The first study participant enrolled in this rabies clinical trial is a significant milestone for CureVac, and allows the company to demonstrate its ability to trigger an immune response in vaccine naïve populations, which is different from vaccines just boosting an already existing immune response such as a flu vaccination,” explained Dan Menichella, CureVac’s CEO.

Though the study is not expected to be fully completed until 2021, researchers are finding that mRNA vaccines may be potentially more durable than standard versions of preventative vaccines.

If that is proven to be the case, the implications of how these new vaccines could help the world’s poor are huge. The mRNA vaccines would be able to be developed quickly—quickly enough, it is speculated, to respond to grave infectious disease outbreaks like Ebola. They would also be considerably cheaper to manufacture. And while most vaccination plants cannot be renovated or repurposed to produce other vaccines, only one mRNA vaccine plant could create multiple vaccines that target different diseases.

While mRNA vaccines still have a long way to go in the way of human testing and production, they seem to be off to a good start. It may one day completely revolutionize the way developing countries—or any country, for that matter—vaccinate. And although the medical field is a complicated one, one thing is for certain: CureVac and BioNTech are companies everyone should keep their eyes on for future breakthroughs.