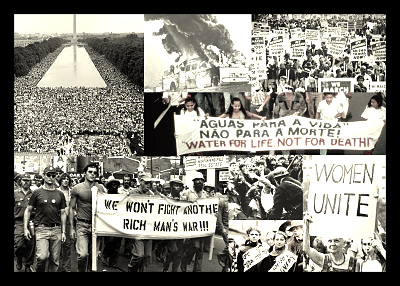 Social change does not happen over night, nor does it happen without a mobilized mission and steadfast support. From civil rights and women’s suffrage to anti-apartheid and Occupy Wall Street, each social movement represents a cause founded upon principles of freedom and equality. However, while these initiatives share many common ideas and aims, no two movements are alike. Every social movement experiences varying degrees of success and failure. So what distinguished successful social action from the unsuccessful efforts?

According to American journalist and social change activist Bill Moyer social movements take time and years of planning. While this may seem like an obvious observation, many movements are all too quickly deemed ineffective before given the chance to flourish. Just because a movement does not reach its long-term goals during the first outbreak of social opposition does not mean the movement as a whole has failed. In fact, highly successful action builds momentum over time and continues to do so even after social objectives are met. In the 1970s, Moyer developed the MAP based on his analysis of numerous successful social movements. From these case studies, Moyer established eight distinct stages that help activists create effective tactics and strategies in hopes of building successful initiatives.

On the other hand, there are many noble causes with passionate supporters that simply lack the political organization and focus to get off the ground and make a serious impact on popular opinion. A CNN article, ‘Why Some Movements Work and Others Wilt,’ highlights some of the common errors of failed social initiatives, such as the Occupy Wall Street movement.

1. Do not be deceived by spontaneity
2. Do not just take it to the streets
3. Do not underestimate silent suffering
4. Do not fight the Man; work with him

The article sheds light on common misconceptions and stereotypes placed on social movements. Not all action has to be radical, aggressive, and impulsive. On the contrary, successful initiatives tend to be slow, deliberate, and subtle. “Successful movements just don’t take it to the streets. They elect candidates, pass laws, set up institutions to raise money, train people and produce leaders.” Likewise, rarely is there one event that sparks outright revolution, but rather, the “steady build up” of social discontent and degradation eventually leads to action.

Equally important to the success of a social movement is its leaders’ ability to work with, not against, governmental institutions. The political and economic support of influential elites provides legitimization for many social causes. “A movement, though, can’t appeal to the altruism of elites to get their support. Elites help movements when they feel their own interests are threatened.”

The successes are numerous, as the campaign continues to improve the lives of people all over the world. “Over the past 20 years, the number of the world’s chronically undernourished has been reduced by 50 percent.” The mission is by no means complete, but in order to retain success, The Borgen Project continues to educate and advocate in the fight against global injustices.