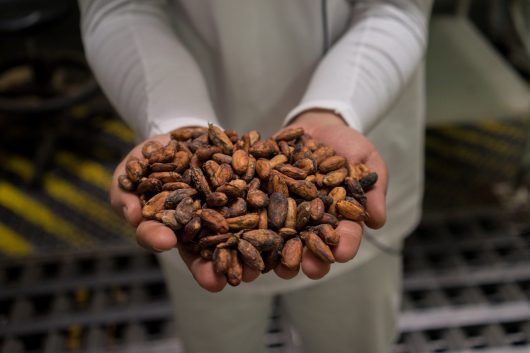 The world’s cocoa (cacao) market is enormous and lucrative, with a worth of over $100 billion and over 4.8 million metric tons of cocoa being produced in 2012 alone. The majority of the world’s cocoa comes from smallholder farmers in Africa, although 15 percent of the industry’s production comes out of Latin America. Yet, despite the size and wealth of the industry, the average cocoa farmer lives on less than $2 a day. Thi is largely due to its complex value chain, with various different middlemen involved that ultimately soak up the profits, causing the actual farmers themselves to be left solely with the economic scraps from the system.

This systemic exploitation of smallholder farmers has caused many to become deeply entrenched in the cycle of poverty while the middlemen profit immensely from the hard labor of the farmers. Farmers can expect to receive no more than 6 percent of the final value of a chocolate bar containing their cocoa, while middlemen like processors will receive 40 percent of the final value of the same bar. Consequently, the economic impact on smallholder farmers is catastrophic, and has ultimately been creating a global decrease in the number of cocoa farmers despite an increase in demand for the product.

In 2010, a local social enterprise in Belize called Maya Mountain Cacao was founded in order to fight this system of exploitation. Maya Mountain Cacao cuts out the middlemen, partnering over 300 smallholder cocoa farmers directly with the fine chocolate industry. They start by purchasing the cocoa beans directly from the farmers themselves, and they do so at a higher rate than the farmers could receive from a purchaser involved in the traditional cocoa supply chain. After that, Maya Mountain Cacao ferments and dries the beans, finishing the whole process by selling them directly to exporters that cater to the fine chocolate industry.

Within two years, those farmers within the Maya Mountain Cacao network experienced an income increase of 20 percent, which allowed for an 85 percent increase in school attendance for their children. Maya Mountain Cacao had so much success that it ended up expanding its model to include nations outside of Belize, ultimately culminating in the creation of Uncommon Cacao, a transnational company serving smallholder cocoa farmers in Latin America.

Today, Uncommon Cacao farmers increase their income by over 100 percent, simply by eliminating the middlemen and connecting directly with the global fine chocolate industry. In an industry that is growing at an average of 3.1 percent per year, the need for sustainable value chain practices, such as those developed by Uncommon Cacao and its cocoa farmers in Latin America, is beyond significant; it is necessary.