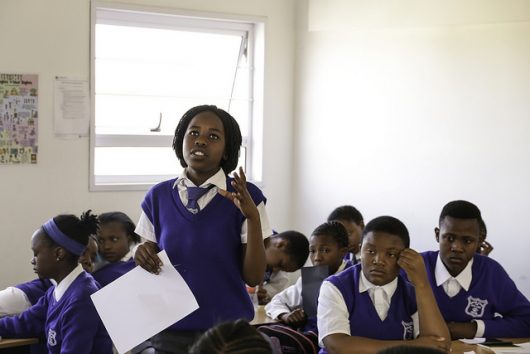 Although it invests more money into its education system than any other African country, South Africa is currently facing a public education crisis. One-quarter of students failed their final examinations this past school year. The dropout rate has also increased, resulting in less than half of current students completing their secondary education, which greatly contributes to the South African education crisis.

Students in South Africa often face challenges in the areas of mathematics and science. One explanation for this issue is that 25 percent of secondary schools do not offer math classes for grades 10 through 12. In 2014 and 2015, South Africa’s math and science programs ranked last out of 140 countries in the Global Competitiveness Report.

Language barriers between teachers and students are also a major dilemma, as South Africa is a very linguistically diverse country with 11 official languages. According to Professor John Volmink, in order to bridge the gap, teachers must be better equipped to teach English to their students.

Multiple leaders also point out the negative consequences of education stemming from apartheid. Schools of better quality are mostly located in predominately white areas, meaning that black students must travel to these schools or settle for sub-par schools in their neighborhoods. Though apartheid is over, the South African education system is still working to reduce its residual negative consequences.

South African Minister of Education Angie Motshekga recognizes the weaknesses in the South African education system and continues to work to overcome the legacy of apartheid. She also plans to work with unions to increase teacher attendance, allowing students more time in the classroom.

Some schools that lack even basic educational resources still excel academically. South Africa also has many high-quality private institutions, although not all families are able to afford these schools. With help from the international community, more South African students can reach their full academic potential.