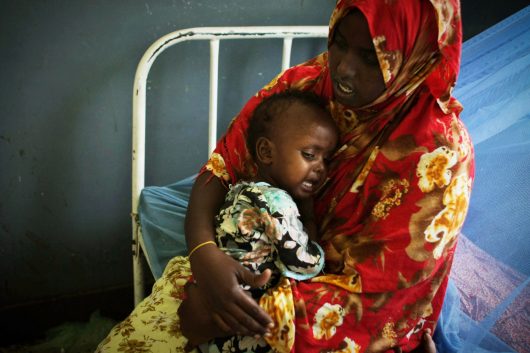 One out of seven Somali children dies before they turn five, measuring at a rate of 137 deaths per 1,000 live births with a staggering number in the south and central areas of Somalia. Pneumonia, diarrhea, diseases, polio, measles and neonatal disorders are among the leading causes contributing to the high infant and child mortality rate in Somalia.

The lack of government security and widespread internal conflict over the past several decades in Somalia has made it difficult for progression to occur and has left the country in extreme poverty. UNICEF has taken it into its own hands and has implemented interventions that have helped those at risk and created some highly recognizable accomplishments. Humanitarian interventions backed by UNICEF in South Central Somalia and some areas in Puntland and Somaliland protect about 2.5 million individuals.

UNICEF has given humanitarian assistance to those in need by providing health services and supplies for the polio and measles vaccination campaign plan and primary health service delivery at Mother and Child Health clinics, which have benefited roughly 201,550 people at risk. Through the Mother and Child Health clinics and Health Post, UNICEF supports about 70 percent of primary health services in Somalia by equipping the nation with medicine, equipment, vaccines and management supplies.

With the polio outbreak that began in May of 2013, the support offered by UNICEF has allowed for a little over 35 additional immunization campaigns to be implemented for children under five. Several of these campaigns have also targeted children under 10 years old and adults. In October 2015, the polio outbreak was declared over thanks to the support provided by UNICEF.

UNICEF has also established a community-based strategy through an Integrated Community Case Management (ICCM) in order to reduce common childhood illnesses that contribute to the child mortality rate in Somalia. The ICCM is designed to use skilled and supervised health professionals in regions that lack access to medical sites in order to deliver health assistance to children. The program is also building up a team of health officials, service administrators and community-based leaders to manage any health risk or crisis that threatens the area. The strategy has benefited roughly 21,000 households thus far.

Somalia has also been scaling up its Essential Package of Health Services (EPHS). These packages, backed by UNICEF, have been adopted as the primary health programme by Somali Health Authorities. EPHS is the main outlet used to strengthen child healthcare and safe motherhood programs, which include child immunizations, maternal, reproductive and neonatal health and treatment of common diseases and HIV. The program has already begun in 39 locales in seven areas throughout Somalia and is continuing to grow. A potential 4.2 million people will benefit from the EPHS services.

UNICEF’s continuous collaboration with partners in working to reinforce the volume of Somali health officials that respond to the health concerns of the population will not only strengthen the governance and leadership of local health authorities but will also improve access to quality healthcare in order to ensure children survive past their fifth birthday.