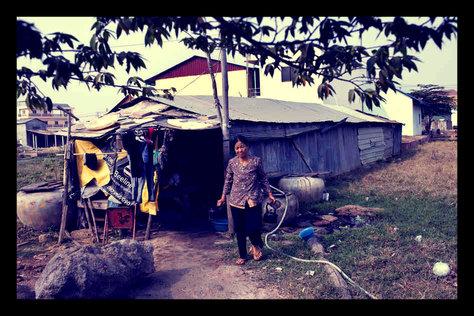 While owning a home has been a quintessential aspect of the “American dream,” one can now say it is also part of the Cambodian dream.

As Sriv Keng and her husband begin their day, they get up in the early hours of the morning and manage to get ready in the confides of a small shack they share with nine others in the outskirts of the Cambodian capital Phnom Penh. Sriv sells rice soup meals near the factories and her husband is a clothing vendor. Making only $800 a month between the two of them, enough to live on but not enough to sustain a decent living environment, the dream of owning a home remained simply that, a dream.

Talmage Payne, an American who grew up serving the poor in Nigeria with his parents and again in Cambodia during the deadly Khmer Rouge era, founded First Finance, a bank that gives out 15 year fixed rate mortgages to low-income families in Cambodia seeking to buy a house.

After failed attempts convincing major Cambodian banks to feed money into his project, Payne, along with a few friends, decided to simply start their own bank. With $300,000 of their own money, along with $1 million raised from donors, First Finance bank become truly the first of its kind.

Surprisingly, Payne claims that due to the economics of low-income Cambodian families, they actually make reliable and good customers. Since almost every member in the family from the youngest child to the grandparents work, this makes them “financially resilient.” With a minimal two percent default rate, First Finance has actually managed to make a profit.

While waiting for the approval of their mortgage application, Sriv and her husband were visited by officers from First Finance. It is part of the routine examination of the bank to meet with their potential customers to see what their financial standing is. They ask for detailed information regarding Sriv’s small roadside business to see how much money she spends and makes.

The Keng’s were approved. Their $16,000 loan helped them buy a beautiful two-story house, complete with indoor plumbing for the toilet and kitchen as well as tile floors and open archways. Although they are paying back the loan on an 18 percent interest (about five percent higher than normal banks), they are confident in their ability to pay off the loan, a loan that would never have been possible had it not been for Talmage Payne and his bank. To date, First Finance has given 700 loans to Cambodian families.