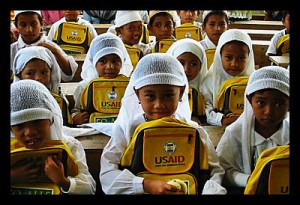 Modernizing Foreign Assistance Network (MFAN) supports the modernization of foreign assistance through collaboration with both Republican and Democratic Administrations and Congress to reform US development policy and practice. The coalition is composed of international development and foreign policy practitioners, experts, concerned citizens and private sector organizations that believe that the US should play a leadership role in achieving economic growth and reducing poverty and suffering around the world. MFAN believes that we can play this role with more effectiveness, efficiency, and transparency.

On May 2, Co-Chairs David Beckmann, George Ingram, and Jim Kolbe commended Congressman Gerry Connolly for introducing the Global Partnerships Act of 2013. The bill would eventually overhaul the Foreign Assistance Act (FAA) of 1961 and allow for more efficiency and effectiveness in providing US foreign assistance.

MFAN supports the Global Partnerships Act of 2013 because it prioritizes several reform principals including the promotion of local ownership and partnerships with governments and citizens. As well, the Act strengthens accountability and transparency through budget planning and ensures program decisions are evidence-based. The approach to development adopted by the Act is one that is more integrated, coordinated, and outcome-based. It is flexible within sectors and agencies and elevates USAID as the US Government’s lead development agency.

Along with the Global Partnerships Act of 2013, MFAN also supports Obama’s latest budget requests and hopes that more representatives and members of the Obama Administration will support the bill. According to MFAN, these budget requests reaffirm Obama’s commitment to an approach to foreign assistance that is more evidence-based and selective. This will allow the US to maintain leadership on global health issues like HIV/AIDS and exercise new leadership with a strong proposal to reform the way the US delivers food aid.  MFAN looks forward to playing a constructive role in this effort to make our foreign assistance more effective and accountable.