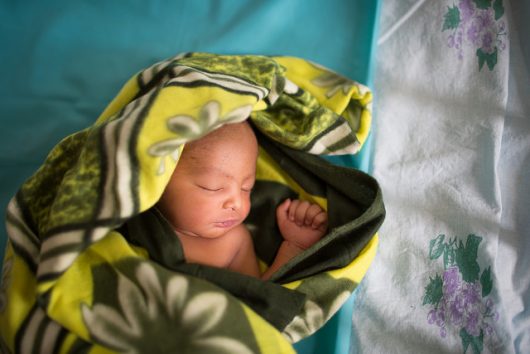 Each year, more than 300,000 women die in childbirth. The top three causes of global maternal deaths are severe bleeding, infections and high blood pressure at the time of birth. Often, pregnant women in developing countries are faced with an impossible decision: seek affordable care from untrained/unlicensed midwives or enter hospitals without being able to pay for modern treatment. It is extremely unlikely that women in this situation will receive the most effective drug for preventing maternal death.

Deaths from infections can easily be prevented through good hygiene practices by the patient and the medical staff attending to her. As for high blood pressure, the most fundamental precautionary measure is to educate the public on adolescent pregnancies, as this is often associated with maternal mortality from high blood pressure. Severe bleeding in childbirth can kill a healthy woman within several hours if proper attention and care are not given to her by her caretakers.

Often there are complications, such as bleeding, that require costly surgical operations or blood transfusions. If the mother is unable to afford the operation, she may not survive the excessive bleeding. In Sierra Leone, many people know at least one woman who has either died in childbirth or lost a fetus due to complications. Maternal care is the comprehensive indicator of the overall development of a country; the healthcare system for maternal health reflects the level of education, infrastructure and transparency of a nation.

Well educated nations with high literacy rates can still experience a shortage of qualified medical workers. Why? They are not properly paid or paid at all. The few qualified or highly educated emigrate for better opportunities and salaries. This resulting brain drain further exacerbates the crisis of maternal mortality. Prior to childbirth, there is also a delay in pregnant women seeking proper treatment. This delay can be attributed to a lack of confidence in the competence of the local healthcare facilities.

Thanks to U.N. funding, clinics in every nation are sponsored to employ local medical staff, which not only provides them with a salary, but with training as well. In addition to improved services, many patients benefit the from donation and careful administration of drugs. Among the most notable is tranexamic acid. Also known as TXA, this drug helps to control bleeding for trauma patients. It helps to stabilize a clot at the site of bleeding by preventing it from dissolving during formation. It has proven to be the most effective drug for preventing maternal death.

TXA works by preventing the conversion of plasminogen to plasmin; this promotes the accumulation of fibrin to form a complex known as the fibrin degradation products. It should be noted that TXA is not an alternative for blood transfusion; it is merely an important addition to this treatment. In addition to trauma patients, TXA has also proven effective in treating combat casualties. It has also been proven to be safe for patients.

In April 2017, the WHO launched a clinical trial dubbed the World Maternal Antifibrinolytic Trial. It consisted of 20,000 women from 21 countries who were diagnosed with postpartum hemorrhage (PPH). It was a randomized, double-blind trial with placebos for some of the participants. The organization wanted to see if bleeding persisted 30 minutes after the first dosage, and if it restarted within 24 hours. If bleeding did persist, it determined if a second dose was necessary.

What they found was that TXA reduced deaths in the trial, and it was evident that early treatment maximized the benefit. It was the most effective drug for preventing maternal death. In their words, “safe, effective and affordable PPH treatments are critical to saving the lives of pregnant women globally, and the findings of this trial have important implications for the delivery of high-quality maternity care.”