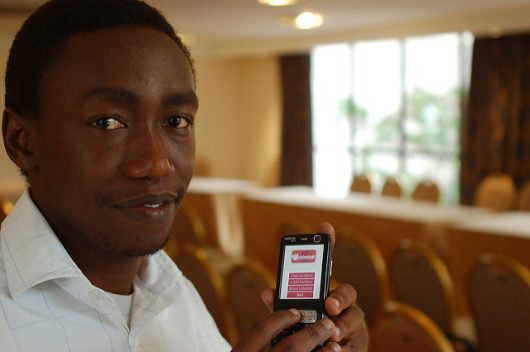 In the rural farmlands of Tanzania, a woman is preparing to plant her crops for the season. She is part of the more than 50 percent of Sub-Saharan Africans who use agriculture to survive and feed their families. Her knowledge stems only from experience and word of mouth. In a constantly changing climate, inevitable questions arise. How much fertilizer does she need? She can either waste time walking to find an expert or an agricultural extension officer, or she can go on her mobile phone. 500 miles away, a family in Kenya is terrified that their crops may succumb to the dryness of the land and die, leaving them with nothing to sell or eat. Their mobile phone allows them to research the weather, giving them peace of mind when it says that the rain is coming, or allowing them to plan ahead when it is not. Mobile phones in Sub-Saharan Africa are already showing their potential.

For these people, a cell phone can mean a world of difference, and it doesn’t end with just agriculture. From education to banking to health, mobile phones opened up to a whole new realm of possibilities for the citizens of developing countries.

The GMSA Mobile Economy 2017 report predicts that mobile phones in Sub-Saharan Africa will reach half a billion users by 2020. This is more than double the number at the end of 2016, making it the fastest growing region in the world. The report attests the climb in numbers to the increased affordability of mobile devices and the improved market for used devices. In addition to the accessibility of information generated by mobile, the economy benefited as well, supplementing 3.5 million jobs in 2016. Tech start-ups are thriving in a mobile Africa as well. According to GMSA, “some 77 tech start-ups across the region raised just over $366.8 million in funding in 2016, growth of 33 percent compared to the previous year.” The opportunities that mobile platforms allow are attracting both talent and investment, according to GMSA.

Sub-Saharan Africa had 140 mobile money services in 39 countries as of December 2016, giving more and more users easy access to paying their bills online and sending/receiving money between friends and businesses. Zazu is Africa’s first digital-only bank, providing users with a debit card, a point-and-pay feature that utilizes the phone to scan payments with participating merchants and a mobile app to access transactions.

The mobile community provides impoverished people the chance to access financial services to make investments, save money and manage expenses. M-Pesa, for example, is a widely-used money-transferring mobile platform that recently added a savings and credit feature. According to GMSA, the platform lifted 194,000 Kenyan households out of poverty since 2006.

The report notes that there are more than 1,000 mobile health services that target families in developing countries. Sub-Saharan Africa makes up 25 percent of the global “disease burdened” population but only accounts for three percent of health workers. Living Goods supports health needs in Sub-Saharan Africa via a mobile platform run by trained health professional agents, focusing on child deaths with simple and affordable solutions. The agents use the mobile platform to identify diseases such as malaria and send automatic SMS reminders to the patient ensuring that they complete the whole course of treatment. Pregnant women can sign up to receive weekly messages with advice on maternal health and nutrition according to where they are at in their pregnancy. Living Goods even sells its own brand of food with nutrients and vitamins, often too difficult for people in developing African countries to access.

Mobile technology also allows those in poverty to receive better educations. Eneza Education is a learning platform utilizing mobile phones in Sub-Saharan Africa, enabling users to communicate with teachers and lesson programs via SMS, the web and Android. Students of all levels can take courses in any subject and interact instantly with teachers via their tablet, computer, or mobile phone. They also offer small business courses and teacher refreshment courses (which is hugely important, considering only about one-quarter of pre-primary teachers are trained in Sub-Saharan Africa). Eneza already has over two million subscribers across Africa and over 300,000 questions have been answered by their live ask-a-teacher feature.

Although accessibility to mobile phones in Sub-Saharan Africa is relatively new, the innovations made so far are a great testament to the technology’s potential. Clearly, the simplest technologies have the power to improve developing countries and make strides towards the elimination of poverty. In a modern world where phones have become grouped with simple technology, they are becoming as much of a right as water filters and electricity.

The things which we take for granted every day hold so much power. Think of what a cell phone can do.