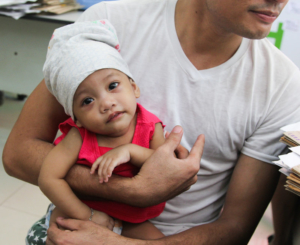 Several factors have led to a steady decline in the vaccination rate over the last decade. The issue of accessibility affects many people in rural areas of the country, putting them at risk of contracting diseases that are easily preventable with vaccination. The Philippines consists of 7,000 islands and does not have a secure health care budget in place, rendering it nearly impossible to ensure that all citizens are vaccinated.

Increasing misinformation concerning the negative side effects of vaccines has led many people to become skeptical about vaccinating themselves and their children. This drop in confidence in vaccinations has been quite significant. A 2018 study found that nearly 100 percent of participants were in favor of vaccines in 2015, believing them to be safe and effective only four years ago.

Who is at Risk?

Anyone who is not regularly vaccinated is at risk of contracting measles. The airborne virus can spread extremely easily and remains in a room for hours after an infected person has coughed or sneezed. The measles outbreak in the Philippines has affected thousands of people, including many young children who were not given the proper vaccination. Children under six months of age are especially in danger of contracting measles, as they are too young to receive the vaccine.

Pregnant women or those planning pregnancy run additional risks if they are not vaccinated against measles. If a woman wants to become pregnant — and is vaccinated beforehand — she should wait at least four weeks before attempting to conceive. This ensures that the vaccine is functioning properly and effectively. If a woman is not vaccinated against measles and becomes pregnant, a variety of side effects can occur. Common reactions include premature birth, miscarriages or stillbirths, and babies born underweight.

Fortunately, the growth rate of the measles outbreak seems to be slowing. New cases decreased to a few hundred per week in May, while thousands were infected each week in February and March. The decline in new cases largely due to local health officials visiting communities firsthand and checking residents’ vaccination statuses.

For children under six months of age who are unable to receive the necessary MMR (measles, mumps, and rubella) vaccine, the best precaution is to limit contact with anyone who is not a primary caregiver. Infants aged six to 11 months should have one dose of the vaccine, while children over one year and adults should have two doses of the vaccine given at least 28 days apart.

A Bright Side to the Measles Outbreak in the Philippines

Despite the tragic number of families that have been affected by the measles outbreak in the Philippines, there is a bright side. Since the outbreak began in early 2019, more than five million people have been vaccinated against the disease. The Filipino government hopes to boost that number to 20 million by the fall, which would mean one-fifth of the country’s population would be newly vaccinated this year. By immunizing such a significant percentage of the population, the Philippines can restore faith in the healthcare system, and prevent further illness and death.