Tag Archive for: Ministry of Education in Cambodia 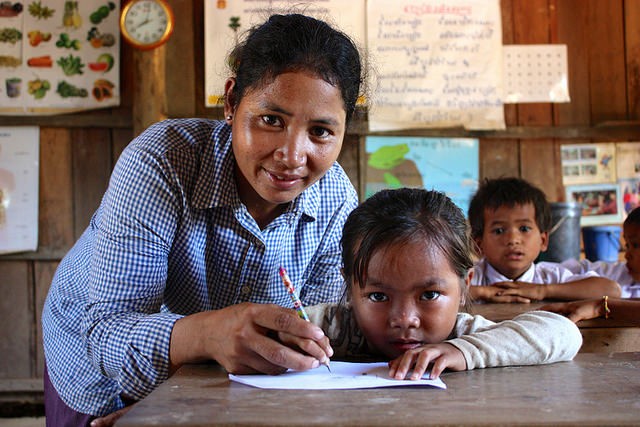 From 1975 to 1979, the uprising of the Khmer Rouge political group upset a previously safe Cambodia where education was not only halted but regressed a devastating amount. Left in ashes over the last decade, education in Cambodia has begun to be re-established, setting in motion a prosperous future.

Cambodia, once considered a safe-haven and “Island of Peace” in the 1950s through 1960s, quickly became a torn country with the rise of the radical political group Khmer Rouge.

The Khmer Rouge’s primary goal was to turn Cambodia into a rural, classless society. To do so, the Khmer Rouge government targeted those most capable of opposing the government. One point seven million of Cambodia’s most culturally intellectual — doctors, teachers, lawyers, accountants, clergy, merchants and engineers — were murdered. As a result, a generation of intellects was eliminated, leaving no one to pass down knowledge to the coming generations.

In an interview with CNN, Khmer Rouge expert Craig Etcheson described how “nearly two generations of young Cambodian men grew up learning little more than how to kill.” So, when the Khmer Rouge was overthrown in 1979, Cambodia had to rebuild from virtually nothing.

Additionally, Cambodia had to reconstruct themselves without approximately 25 percent of its entire population, consisting primarily of its educated class. Though democracy was introduced in the early 1990s, strengthening the country has been a glacial process. However, education in particular has been making strides in providing access to schooling and sex education.

Schooling in Cambodia
In 2003, the nonprofit organization Caring for Cambodia was formed to improve education in Cambodia by raising money and building schools for kindergarten through 12th-grade. Thus far, CFC has built 21 schools in the Siem Reap region of Cambodia.

According to CFC’s website, over the course of five years, schools that participate in the program see a 70 percent enrollment increase.  CFC has secured 4,000 financial supporters as well as acquired 250 devoted volunteers to carry out its mission of providing education in Cambodia to an increasing number of children.  Students of higher education are also being given more access to opportunities.

Sex Education
From 2010 to 2014, the pregnancy rate for Cambodian girls ages 15 to 19 increased from 8 percent to 12 percent. In 2013 to combat and reduce this pregnancy rate, Cambodia began a test project throughout schools in nine regions of Cambodia.

This pilot project taught students in primary, secondary and high schools about practicing safe sex, pregnancy, sexual orientation, sexually transmitted diseases, and gender-based violence and abuse. According to Cambodia Daily, teachers in Cambodia have attributed previously skipping over such subject matter to parent opposition as well as it being a “sensitive issue.”

Despite some believing sex education to be a taboo topic, the Reproductive Health Association of Cambodia has recommended the government make sex education a core subject in grades five to 12.

As advised, the Ministry of Education in Cambodia will be rolling out the pilot program nationwide by 2019 with the goal of decreasing the pregnancy rate in girls ages 15 to 19 by educating and changing the traditional social norms.

Although the Khmer Rouge takeover presented destructive setbacks for Cambodia socially and economically, education in Cambodia has been making meaningful improvements since the turn of the century and optimistically continues to do so.